Swype is one of the most poorly kept secrets on Android. I call it a secret because it’s not available on the Android Market – you have to sign up for the beta to get it. That said, it’s now coming as the default input keyboard on some Android phones.

The install technique is a little unusual in that it requires you to download an installer, then find and install the installer, which downloads the program, which then installs swype. Got that? Also along the way you have to register for the beta, then enter your details into the downloaded installer downloader.

But oh man is it worth it.

Many years ago, when I was very much into my Crappy Windows Mobile Phone, I used a keyboard called Fitaly. This was back in the days when you punched away at your pda with a plastic pen and typing on it was real bastard. Fitaly was a non-qwerty keyboard which was mathematically designed such that something like 80% of the most common keys were right in the middle of the keyboard. I eventually got myself up to something like 80 words a minute on this thing – it makes you cry when you look at today’s iPhone chicken scratch keyboard.

Swype is built on the same concept as predictive text input on non-qwerty keyboard mobile phones. Basically instead of chicken scratching your way across the keyboard, you swype your way along, pausing briefly (or not) at the letters you want typed. From the pattern you draw, Swype works out what is the most likely word. If there’s only one – it enters it. If there are several but the most likely one is very much the most likely – it enters it. Otherwise you get a list of possibilities, with the most likely being at the top and the default word if you continue swyping.

You can get VERY fast with Swype, and very accurate. I strongly suggest reviewing the tutorials and videos before you get too far into it  – it will save you a lot of frustration and lost productivity. Ask me how I know this. 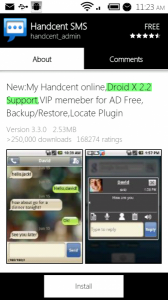 The default SMS app is ok – but Handcent is SMS on steroids. To be honest I don’t use MMS or much of the fancy stuff, but I did play with a lot of the customisation options available.

It’s skinnable, you can customise notifications, etc. Importantly, Handcent has been very reliable. Believe it or not the default SMS app has not.

Next I’ll introduce you to an App that will finally let you take volumetric control your your Android phone. Er, the sound that is.