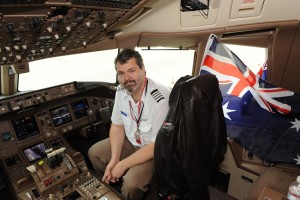 My name is Ken Pascoe and I’m the fortunate guy who will be one of the Delivery Captains for V Australia’s (Virgin Blue’s Long Haul Airline, later to be part of Virgin Australia International) first Boeing 777-300ER next week from Seattle to Los Angeles and then the big one, LAX to Sydney.

I’ve decided to blog the trip, mostly for the benefit of the other hard working deserving staff at V Australia who aren’t fortunate enough to be part of this experience.

I’ve been with V for 7 months now, training and checking pilots in the simulator, designing and documenting lesson content and Standard Operating Procedures, providing decent coffee and cake at the sim center (thanks to my wife Meg), and everything in between.

With me on this flight will be Captains Dave Kienzle, Paul Halpin, and Kevin Beard. All of us will be making our own way across to Seattle. What follows is a series of blogs that detail this journey from my home to the conclusion in Sydney. I hope you enjoy reading them at least part as much as I did experiencing them!

Well, it’s 3:30 am and the taxi is due in ten to pick me up and take me to the Gull Bus to commence my journey. I’m packed and on a whim have decided to blog this epic as much as I can, just to see how it turns out. I’ll try and take some snaps on the way to make it interesting (including for me).

It’s going to be a looong day.

With all the time zone (and date line) switches, I haven’t looked to see the total travel time. But it looks to me like about 28 hours in and out of Economy. Frabjous Joy.

That said – thanks to the International Date Line, it takes place within a single day – the 2nd of February, 2009. So how bad can it be?

And that’s the end of the negativity. I’m headed off to collect Vs first 777 – How fabulous is that? – I wouldn’t be anywhere else or anyone else for the world.