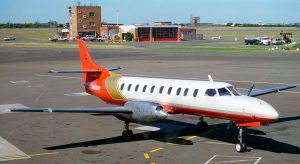 On the back of some superb instruction and guidance I had navigated my way through the Simulator Training and Assessments, and was most of the way through my Line Training, with my Initial Check To Line (CTL) looming. I’m sure many of the pilots reading this are twitching slightly, as these words remind them of this time in their own careers.

In this instance I was completing a four day trip. Day one saw us departing Dubai before 3AM to wind up in Singapore at lunchtime. Day two departed Singapore 24 hours later to head on down to Melbourne. This was day three – Melbourne back to Singapore, leaving at about 7pm, to arrive in Singapore around midnight. The trip was 28 hours in 4 days and it kept you busy …

In this instance I had a further complication – a pleasant one – in that I had my family on board. Meg, my sons Lewis & Fin, and just barely toddler Ruby Velvet. They were fortunate in this instance to be in Business Class  (normally no  upgrade to Business for the family of First Officers who had the temerity to travel with their kids!).

My Training Captain was a Jamaican Gentleman who’s name was Mike (Amir) Nelson. While I recall him as an excellent, patient trainer and a good guy – mostly I remember he had a fabulous voice that would give James Earl Jones a run for his money – combined with that Jamaican accent. Awesome. To this point the training – and the flight – seemed to be going well …

This story begins when we are right up north over Australia in the dead of the night, and the phone rings. Actually the aircraft intercom, but the simile holds. It’s the Purser (Flight Manager) calling. Mike took the call since I was “flying”; spoke briefly to Andre the Purser, then handed the handset to me. I handed over control of the aircraft, and took the call.

… and so the call comes to an end.

I expected I would hear some time after that all was well, and Andre/Meg had either re-assured the Mum, or managed to find a new seat for her in the cabin, or both. Sure enough … 10 minutes later the phone rings again, and this time I answer the call.

…  But this time it’s the SFS (Senior Flight Steward/ess) from Business Class. And her voice is accompanied by a (very) loudly crying child … who turns out to be Ruby.

… So it turns out that when Meg went down with Andre to the rear of Economy, she left Ruby in the care of the SFS. Ruby was barely awake and calm when Meg left … but not for long. She woke, discovered herself in the arms of a stranger, and let fly with her disappointment and consternation at this turn of events. Very quickly the SFS escalated this problem up the tree and with the Purser – and Meg – otherwise occupied – called me.

I explained the situation to Mike and with tolerant smile he took both the Radio and the Aircraft, and I headed back.

As I entered the Business class galley, there were fully 4 cabin crew all clustering around Ruby, who was sitting on the galley bench, very unhappy, and expressing that unhappiness clearly to all the business class passengers.

She saw me coming around the corner, raised her arms and called “Daddy“. More than enough to melt your heart. I reached for her and as I picked her off the bench, she got a strange look on her face, then threw up all down the front of my shirt, tie, trousers, socks and somehow – into my shoes. Quite honestly the ratio of all-over-me to not-much-anywhere-else was extraordinary. Once this alien-esque explosion of everything she had ever eaten since commencing solid foods was over – Ruby was in much better spirits. I on the other hand … not so much.

Fate chose this moment for Meg to come around the corner, take it all in with one glance and state “Oh no, not again.” Seriously? There had been more in her than this at some point? I think I know then why it had to come out.

I handed Ruby to Meg and as circumspectly as I could – headed forward through First Class and into the Toilet just outside of the Flight Deck. I spent the next 20 minutes rinsing my Shirt, Trousers, Tie and socks in the sink, and cleaned up my shoes. By this time Andre had come calling and I got him to secure for me a Coat Hangar. I hung my sopping but basically now clean shirt and trousers in the cupboard – and headed into the flight deck.

I want you to picture for a moment the scene where Mike the Training Captain watched me leave the flight deck, pausing to put on my tie and check it was straight, to sort out a problem in the cabin. Then almost exactly 30 minutes later (where the hell can he be – how long does calming a kid down take?) I practically burst back in (minimising my underwear time in the galley area just forward of First Class) – wearing a singlet, boxers, SHOES … and that’s it.

With a Herculean effort, he examines me for a moment and then with very clearly enunciated words says – “Is your daughter ok?“.

I honestly can’t recall how long it took, but I’m pretty sure I was the one who broke down and told him what had happened – he outlasted me. I completed the sector (at least another 3 hours) to Singapore, with the aforementioned practice Autoland to complete that aspect of my training syllabus. Once the First Class passengers were off, Andre made sure the area was clear for me and I popped into the loo with my very dry (low humidity on the aircraft is good for something it seems) but very crinkly clothes in hand, dressed and headed into the Airport with Mike and the crew to meet Meg and the kids at luggage claim. With a story to tell … nearly 20 years later.