After an 8 month hiatus – I returned to flying in August to the Los Angele route. On my first trip, I noticed that during the return sector from LA we had burnt more fuel than I could readily account for, and the FMC Progress Page Calculated Fuel was somewhat lower than the Totalizer fuel (more on this later).

Note : There are two means for determing fuel on board on the 777 – Totalizer Fuel (fuel sensed in the fuel tanks); and Calculated Fuel (calculated as fuel on board since start by the Flight Management Computer FMC)

Over subsequent flights, and based additionally on feedback from other Instructors – it appears we’re seeing some odd behavior in the Calculated/Totalizer split. From my experience (and that of others) – the following is what I would expect to see from these two values. Note I’ve validated my background data with other 777 operators who agree with my expectations.

What I’ve been seeing however is the following:

It should be remembered that all FMC fuel predictions are based on the Calculated value. Based on the expected behavior of the aircraft systems – we have always trained that for most of a long haul flight, the FMC Calculated fuel on board (and hence the FMC fuel predictions) are the more accurate figure. At the end of the flight – the Totalizer should be (more) accurate, but pilots are reminded to review the Calculated/Totalizer split – particularly those cases where the Calculated is higher than the Totalizer, since this can lead to false impression of fuel state on descent.

With a 1500 kg lower Calculated value, and a slightly increased fuel burn – we are seeing the FMC/EICAS [] INSUFFICIENT FUEL message, which cautions the crew that based on current FMC predictions, they will not land at Destination with enough fuel to conduct a missed approach and proceed to their Alternate with statutory reserves intact. This message is not a train smash – but it’s an indication that fuel consumption has been in excess of what was planned, and combined with poor weather could lead to a diversion.

However if this message is coming up based on a falsely low Calculated value – in comparison to the higher Totalizer value – then this is a concern. I should mention that like all airlines there’s an active fuel monitoring program in place which utilizes extensive onboard recorded data to ensure that the aircraft is consuming fuel as it should, resulting in performance decrements that are maintained in both the flight planning system and the aircraft to enable accurate fuel consumption prediction.

Before I go much further, I’d better recap on the systems for those who are still catching up …

The FQIS system in the 777 works by bouncing sound waves around the fuel tank, using 28 sensors in each main tank (20 in the center tank) to determine the quantity of fuel on board. Based on the reception data returned by the probes (VOS is Speed of Sound in the maintenance page shown right) – the FQIS calculates the volume of fuel in the tank. Built in Densiometers (is that a real word?) provide the fuel specific gravity (SG) to turn the volume into mass.

I’m not kidding – this is how it works.

While the tanks are baffled (the other baffled, the FQIS is not confused; well mostly not) and compartmentalised over and above basic the Left/Right/Center nomenclature, the measurement can be subject to a number of errors including dynamic movement in flight (pitch/roll/yaw changes). Certification accuracy is based on ground readings or level flight and even then the potential error is designed to be less than 1% – which could be +/- 1470 Kg with full tanks. That said – in my experience the system is far more accurate than this.

The system is pretty good, but it can be seen that with an error rate proportional to the quantity being measured – it is likely to be far more accurate at the end of a long flight than at the beginning. On top of this is the impact of flight dynamic effects such as reading the Totalizer as the aircraft turns over waypoints. As mentioned previously, the recommendation is to use the FMC Calculated over the Totalizer value for most of a long haul flight – keeping in mind the Calculated/Totalizer split – and evaluate both Calculated and Totalizer values when preparing for the arrival.

Moving on the the FMC Calculated value …

Boeing 777 FMC Calculated Fuel On Board

The FMC calculated value is set to match the FQIS Totalizer value until engine start. At this point the Totalzier?value is taken as a base reference, and from this?point on the FMC Calculated value is equal to the original Totalizer value at engine start, minus?the fuel consumed by the engines. Fuel Flow transmitters in the engine are converted to mass flow by the EEC’s and sent (per engine) through the Aircraft Information Management System (AIMS) to the FMCs. The FMC displays the fuel consumed by each (LEFT / RIGHT) engine, the addition of these two values (FUEL USED), and the value Calculated to be left on board.

The accuracy of the fuel flow figures range from 12% (at idle thrust) to 0.5% at cruise thrust. Since the cruise error rate is based on Fuel Flow (0.5% of ~8000 Kg/Hour) which therefore produces a potential error of 400 Kg/hour, less than the possible error of the Totalizer value. While nothing is certain – my experience is that the accuracy of the calculated value is much better than this 400 kg/hr certification limit. 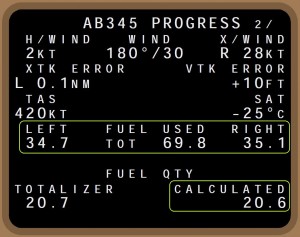 These values are shown on the FMC Progress Page as Fuel Used Left/Total/Right, and are used in the subtraction to calculate FMC Calculated Fuel. This value is used throughout the FMC to predict fuel ahead at waypoints throughout the flight to Destination, and by implication the weight of the aircraft throughout the flight. Predicted weight impacts the forecast step climb points, which therefore impacts fuel and time predictions at destination.

As mentioned before – over the course of a long flight my experience is the relationship between the two values can be characterized as:

So why are we seeing what we are seeing?

While I chased down opinions and information from other 777 operators, we also asked for data from our instructors. My three flights notwithstanding it became clear that while the Calculated/Totalizer anomaly was quite apparent (LAX -> Australia); on many flight fuel consumption seemed higher as well. A?fuel consumption anomaly is an old story and there are a number of avenues to explore, including excess cabin baggage, standard weights, aircraft weight, Jet A fuel calorific value, and others. However the Calculated/Totalizer was a perler.

Then I sat down this week with Captain Bill Hunt, Chief Technical Pilot 777, from Boeing. With some input from a Virgin Technical Pilot, we hit on a scenario which just might address most of both issues …

All our flights to LA arrive in the morning; all leave in the evening. All are pre-fuelled for the evening departure up to about 90 tons of fuel (against an eventual departure fuel of 110-120 tons). The aircraft are then towed away from the stand, parked in the sun and left there, the fuel heating up, before being towed back onto stand just before refuelling for departure late in the evening. It’s a known phenomenon that such a process, particularly with large diurnal variations in temperature, can result in “fuel stratification” in the Center Tank. Now don’t bother?Googling this, because I can’t find a reference to it – but we’re theorizing that a center tank with 40 tons of warm fuel, and 20 tons of colder fuel on top could result in an FQIS error. Imagine the following scenario:

We’ve started looking at this in conjunction with Boeing technical. I can see a couple of in flight short term solutions such as resetting calculated to totalizer at top of climb (having verified the split is due to an on-stand FQIS under-read); but the first priority is to confirm the diagnosis – or develop another one.

In Australia our aircraft do relatively short turns between sectors; in Abu Dhabi (where the temperatures soar) – we don’t pre-fuel. This goes part way to explaining why we might see this on LAX -> Australia (if this is actually what we’re seeing) and not anywhere else. It?would also make this a seasonal phenomenon, with the anomaly?reducing or disappearing during the Northern Hemisphere Winter. My?contacts with other airlines has failed to identify any airlines that pre-fuel and sit the aircraft on the ground all day like we do in LA – which means I haven’t been able to compare. Most agree the theory sound plausible …

We’re going to tactically eliminate the pre-fills on warmer days to see if the effect reduces, and gather more comprehensive data on fuel consumption from crew over the coming weeks. Boeing will no doubt be involved, and we all look forward to learning something new about the aircraft!

« Temperature Inversions and Takeoff Performance Calculation When do you Rotate? »