I recently showed some photos I took a few years ago of a Delta 767 crossing the Irish Coast to another Captain I flew with to LA. He was so stunned by them that I decided I may as well blog about them – three years later. Looking at them at a remove – they are quite amazing. I keep a collection of photos on a public picasa web album, and all the contrail photos (as well as the video) can be found there. However while public, I guess the Picasa album is not the most easily found page on the web … so here goes.

Click on the photos (in most browser) to see  larger image. 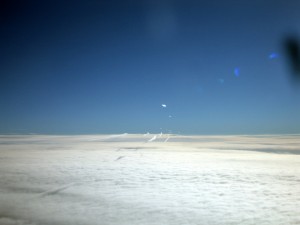 As we completed our Atlantic Crossing, we closed on a number of aircraft ahead - Delta 48 (a B767) was just one of these. 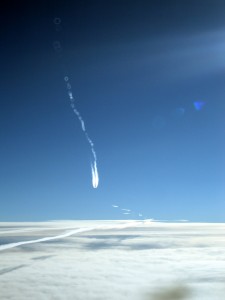 As we closed on Delta 48 - we notices that his contrails were breaking down, which is pretty normal, into individual curls or rings of contrail - which is not. 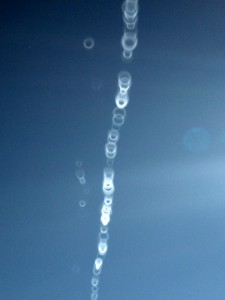 It's hard to see here, but the individual curls are actually spinning in the sky. It was amazing to watch - see the videos on my picasa album 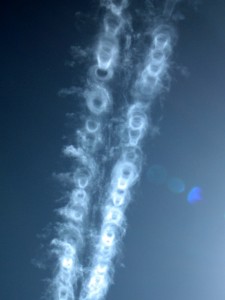 As they spun, the began to break down behind the 767. It was fascinating to watch

Close in, the initial contrails coming out of the 767,s engines were impressive enough with atmospheric conditions just right for some impressive contrail generation

I’ve taken some other spectacular contrail shots over the years – a fabulous underside view of a Sri Lankan A340 over the Gulf comes to mind – but these were something else. I’ve never seen anything like it since, and neither have any pilots who’ve seen the images.