Several years ago, I was part of a team that developed and deployed a series of aviation podcasts – Flight Podcast. We started off with a bang with an interview with the Eric Moody Captain of Speedbird 9, the British Airways 747 that flew through volcanic ash and lost all four engines over Indonesia. We complete 6 podcasts in all that can be accessed through www.FlightPodcast.com 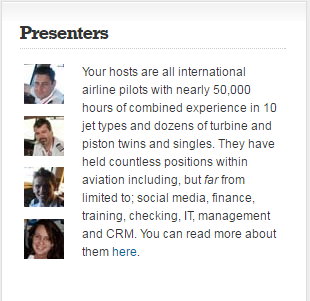 The team consisted of Marty Khoury and Adam Saddington (who worked with me at the time on the Boeing 777 at Virgin) and Karlene Pettit who was/is an Airbus A330 pilot with Delta Airlines. Between us we had a unique set of skills covering a wide range of General, Domestic, International and other Aviation spheres and interests, age ranges, life experiences and more. For all the experience and skill set that these people brought to this forum – my strongest memories of these times is the fun we had talking about flying (and a lot of other things). I believe this came through strongly in the podcasts themselves, along with our genuine professional and personal commitment to aviation, particularly the training and safety aspects of Airline Aviation. Over the past years I have been astonished and honored by the random people who have told me they listened to and enjoyed our transmissions – many of them totally unconnected with Aviation.

While the positive confluence of our abilities, opinions and personalities was purely chance – the fact that we came together was initially (I suspect) one of happenstance and geography. I was working at the Simulator Center in Silverwater down the road from Marty’s house; Adam and Marty are good friends of long standing; Karlene (once we got her a decent microphone) was ready to go on Skype. And it was Geography (along with the pressures of our busy lives) which slowed things to a halt – with Adam moving fleets, Marty getting married and moving house, the Simulator moving to Brisbane, Karlene publishing her book and collecting grandchildren – we’ve been unable to organise ourselves and get back together to produce another podcast.

Which is a shame. Sitting in the wings is the content already recorded for at least one more podcast (an interview with Dick Rutan) and possibly another. As part of engendering interest in getting us together again, Marty yesterday sent me an MP3 file. As soon as I listened to it I couldn’t stop laughing.

Marty is a perfectionist. Don’t be taken in by his at times laissez faire faire attitude to – oh, I don’t know, answering the phone? Returning emails? – when he’s working on something he cares about he is as focused and dedicated as anyone I’ve met. So when it comes to reviewing the 4 hours of audio we’ve generated against a 45 minute podcast, he’s dedicated, and quite frankly, anal, not to say cantankerous. Most particularly he would bitterly complain after, before and even during recording about audio quality (STOP PUT-PUTTING INTO THE MICROPHONE PASCOE), and particularly our unrestrained and precipitous use of the term “UM”. He would work his way through our recordings and remove them all, smoothing the audio to cover the gaps. For us this work – done exclusively by Marty – was quite clearly both onerous and un-necessary. Who cares about a few “UM”s? It’s ridiculous.

So at one point Marty made us a recording of the UMs. From memory – the above audio is actually all the UMs removed from just one episode. I started listening to it and it just got funnier and funnier. I’m not sure if that is because it’s actually funny – or it’s only funny for me because I have so much context and history with these people and this project. If you can stand to listen to it for a while, let me know if you think it’s funny too.

P.S. While pretty “focussed” on the editting , Marty was a genuine control freak on the microphones and audio board as well. All I wanted to do was have a go.