A question concerning a recent change to the missed approach procedures in Dubai UAE (OMDB) has raised some interesting points about the 777 in this flight regime – high thrust, low altitude, high pilot workload; and ATC procedures that would seem to be not too well thought out.

Specifically the new procedure introduces a not-above altitude of 1300 ft AMSL after going around from a near sea level Precision or GPS approach minimum (1000 ft missed approach climb).

As any pilot of a two engine jet aircraft can tell you – early level off’s in the missed approach are not a good thing. Typically anything below 3000 ft introduces a significant workload on the pilots – and that’s when the missed approach is straight ahead, the autopilot is engaged and the aircraft fully functional. Add some manual flight and a non-normal element to this … the SandPit Pilots must be just loving this new procedure in the simulators in Dubai. The French did an extensive study on errors made during the missed approach and the folly of low altitude requirements in the missed approach path was just one of their conclusions.

This new procedure initially tracks straight ahead from the Missed Approach Point (MAP) [That’s a good thing] to DB710; but requires the crew to level off at 1300 ft AMSL [Not so good]. It then requires level flight for approximately 3nm [Why? Why?] during which a turn must be commenced (at DB710), and the then finally the missed approach climb segment may be continued (from DB711) to the final Missed Approach Altitude (MAA) of 3000 ft AMSL. 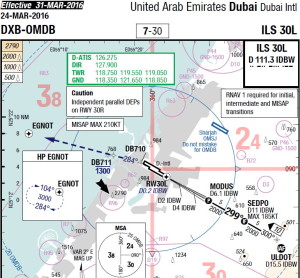 There clearly must be a reason driving this procedure. For the life of me I can’t think of an obstacle related one, unless a Sheikh has placed a permanent hot air balloon at 2000 ft off the end of the runway to see the sights, one of which is watching aircraft sailing by under his balloon at 1300 ft. This is Dubai remember, it could happen.

I can only assume that this altitude requirement in some way keeps aircraft going round from tangling with aircraft either (a) going around; or (b) approaching in the opposite direction on the other runway. In either case it’s a poor excuse for the potential cluster this introduces into the flight deck.

The biggest problem with these early level offs is Thrust. The 777 Autothrottle is supposed to limit thrust on a two engine go-around from full thrust back to a setting that guarantees at least 2000 fpm. It does this very, very well. In fact it does this so well that you usually get well over 3500+ fpm by the time things have settled down, which by definition is at least 2000 fpm, but is not particularly helpful when you’re trying to keep control of your aircraft. You have to remember these engines are designed to lift 350 Tons of aircraft (with one engine failed). Lifting the aircraft’s 250 ton landing weight on both engines is an underwhelming task to say the least. All two engine aircraft are fundamentally overpowered right up until the point where one of the engines fail …

Additionally the link between the software of the Autothrottle and the software of the AFDS Takeoff Go-Around (TO/GA) and Altitude Capture (ALT) modes is a tenuous one – in fact there isn’t one really. As such each and every time I ran this scenario – unless the pilot intervened, the 1300 ft restriction was exceeded by at least 100 ft because there was simply too much thrust/energy for the autopilot to capture the altitude adequately. This probably won’t set off alarm bells in the ATC center or the airline Flight Data Monitoring (FDM) programs. But it doesn’t look good in the sim on your check.

The really cool thing is that after this minor bust you’re about 1300 feet above the ground shortly after a go around and sinking back down to your required altitude – you guessed it, several times the GPWS activated to give me a stern “DON’T SINK” caution. It’s a good thing really. Because I spend far too much time operating this aircraft safely within the best practice envelope, I just don’t get enough practice at listening to GPWS warnings. It’s nice to know I can go somewhere in the world and operate the aircraft as the manufacturer intended but still get to hear “DON’T SINK” after the go-around …

Well, you have a couple of options, all based around manual flight intervention. You could disconnect the AP early in the maneuver and manually capture the altitude, avoiding the altitude bust. Nothing is for free however, your workload will increase significantly also increasing the likelihood of error. Meanwhile your thrust won’t be behaving any differently, so as you push forward manually on the flight controls to capture your altitude (giving your passengers a free roller-coaster feeling) you’re likely to get an small overspeed as the thrust levers struggle to catch up. Options to fix that include overriding the Autothrottle temporarily and reducing thrust to contain the speed/altitude – or going full manual on the thrust. You thought the workload was higher going manual early in the missed approach? How is it now? The truth is that there just isn’t a simple, appropriate fix to this problem – if there was, the Autopilot would have been able to do it. 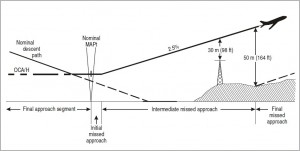 With an intermediate level off prior to the final MAA, the question occurs – when will you accelerate and retract Flap? Initially the speed will be flown based on the approach speed, with one stage of flap retracted in the go-around maneuver. Hence you are typically flying at Flap 20 and you’re a few knots below Flap 20 minimum speed, which is considered acceptable when you have a massive amount of thrust on and you’re rocketing up for the sky. But since you have not reached the final MAA, most airlines will require their pilots to retain this slower speed to ensure terrain clearance in the subsequent sectors of the missed approach procedure until reaching MAA or an earlier altitude that guarantees terrain clearance. As discussed elsewhere, typically terrain clearance for intermediate acceleration in the missed approach is not assessed – and there’s no indication that it has been assessed here. The presence of a 768 ft obstacle just at DB711 where you’re still held down at 1300 ft for no obvious reason isn’t encouraging. So the chances are you’ll want to retain your initial missed approach speed until you finally reach the MAA of 3000 ft AMSL.

But as your Autopilot Flight Director System (AFDS) captures 1300 feet as set in the Mode Control Panel (MCP) Altitude Selector – the speed automatically jumps up and the aircraft accelerates away, taking the decision away from the unaware pilot. Thrust – which is already very high for a 1000 ft altitude change – now increases as it’s released from the shackles of only needing to provide at least 2000 fpm, and instead drives to full GA thrust in order to accelerate the the Flap limit speed. Given this occurs as you’re still trying to level at 1300 ft – you can see why the altitude bust keeps occurring.

In any case – since most international airlines do not accelerate in the missed approach until reaching either MAA or a point at which terrain clearance is assured – you will NOT want to let the aircraft accelerate. This means winding the speed back after ALT capture; the later you managed to do this, the longer you’ll be under large thrust settings. 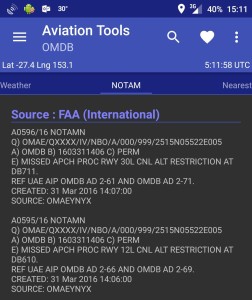 It’s worth noting that any physical change in the MCP Selected Speed after the TO/GA mode has been activated dis-arms the speed jump up when ALT captures. I demonstrated this several time today. Once estalbished safely in the go-around (Flight Mode Annunciator (FMA) modes verified; positive climb; Gear Up) – when the “Four Hundred” foot call was made I reached up and increased the selected speed by one knot. With this done, the speed remains at go-around speed when the AFDS ALT captures. This technique works even if you change the speed and then reset it to the initial go-around speed; or simply set it to the minimum speed for your go-around flap setting (Flap 20 or Flap 5) for a more comfortable level segment at 1300 ft.

In my Procedures and Techniques document, I have a small paragraph on commencing the Missed Approach from above MAA and a suggested technique for it – we experience this occasionally in KLAX where the approaches often commence from 4000 ft – but the MAA is 2000 ft.

When commencing a missed approach like this one where you’re actually higher than an altitude requirement – the standard procedure of TO/GA, Pitch/Thrust, Gear won’t help – you actually want to continue the descent down the approach to the altitude restriction (1300 ft). For a precision approach the priority is to de-select Approach (APP) mode. By design an engaged APP mode will fly you straight through your 1300 ft requirement.

Additionally if you’re in APP?mode at 1500 ft it locks in and you’re only way out of LOC/GS at that point is to disconnect the Autopilot AND cycle both Flight Directors OFF. Having de-selected APP the AFDS should be in HDG/TRK and VS. Laterally LNAV is probably the best choice (is your active waypoint ahead of you?), and VS will suit you fine until you capture either MAA or the lower requirement (in this case the 1300 ft). If you’re capturing MAA (such as in KLAX) you now have the option of accelerating and cleaning up. But for this strange procedure – you may need to maintain your approach speed flying level until you eventually reach the final MAA of 3000 ft. Don’t forget to raise the gear at some point …

In summary – odd procedures like this expose some of the limitations of our aircraft, it’s systems and our procedures. It’s worth running a few of these low altitude captures next time you’re in the simulator.

Finally – a recent NOTAM indicates that UAE ATC may have had a change of perspective on this procedure. Whether this comes from operational experience and results in a permanent change – we’ll have to wait until the next documentation cycle to find out.