I recently had occasion to look at Garmin Pilot. My background in EFB ranges from Boeing’s Class 3 in the B777 to LIDO mPilot (in the way early years) on Windows and more recently IOS, to several years of using and being a beta tester for Jepp FD Pro. I have a subscription to Jepps but after leaving my previous employer, I’ve lost access to the Pro version. Being in an aircraft where the visual display of information from the FMC is basic at it’s best; no in flight connectivity and operating without ACARS means I’m now required to be far more self-reliant operationally. Hence I was casting around for an EFB-like app for the iPad instead of trolling my way through NAIPS and several other dependant apps. In the absence of anything else, I commenced a trial of Oz Runways – but then came across Garmin Pilot.

The way I came across Garmin Pilot doesn’t really reflect credit on Garmin, or at least not on Apple/IOS; or perhaps it’s the Bluetooth Consortium that’s at fault … but basically having lost my (their) iPad to my previous employer – I was forced to shell out real money on an iPad for the first time in my 40+ years as a PC->Android person … so I bought an iPad Air 2020. As part of using it on the flight deck, I powered up my venerable Garmin Glo. Getting a reliable GPS position out of an iPad seems no easier in the BAe146 than it was in the B777 and so I use the Glo. While it’s perfectly serviceable and very reliable and has served me well – it’s not my favourite piece of consumer electronics. While it’s been 100% on my own iPad – for a device that’s supposed to support up to 4 units it’s usually flatly refused to let anyone else on my flight deck connect. Secretly I was impressed with that display of overt loyalty really … But the fact that you can’t charge it up without it turning on drives my design-brain insane.

Anyway … after I got my new iPad Air I set it up on my BAe146 flight deck, powered up the Glo and … utterly failed to get it to connect to the new iPad. I persisted for a while but eventually realised it was fruitless. It would connect to older iPads, my phone, my computer – but not my new iPad. Once I got home after several days of research, ROM flashing, contact with vendors and various bluetooth experimenting – I realised I now needed a (very small) boat – because this thing was an Anchor. After some further research and examining of finances … I bought a Garmin Glo 2. While the mild feeling of the insanity of a repeat purchase was there – I bought the Glo2 for the same reasons I bought the Glo1 – by all accounts, it’s simple, reliable – it just works. And it’s cheap.

I’m sure there’s a lot more too it – but the basic difference is that the Glo2 looks at GLONASS as well as the US GPS constellation. Clearly the single biggest upgrade though is that it connects to my iPad Air 2020. Anyway … I upgraded my Glo in the midst of evaluating Jepp FD Pro against the new LIDO mPilot and OzRunways – and my Glo2 came with a 30 day trial of Garmin Pilot.

Full disclosure – I’m about to become a beta tester for Garmin Pilot. But I am a fully paid-up subscriber of the Pro version, paid with my own hard earned money, and a True Believer. I’m going to write a few articles as a deep-dive on specific aspects of Garmin Pilot that I think really show how this EFB emulator just shines on a flight deck – but the rest of this piece is a quick overview.

For my usage – the main components of Garmin Pilot include:

My next post will look at one of these features in detail. In the meantime – here are some pictures that hint at how good Garmin Pilot is. Stay tuned for more.

The map provides an overview of a planned flight on which live weather radar can be overlaid. 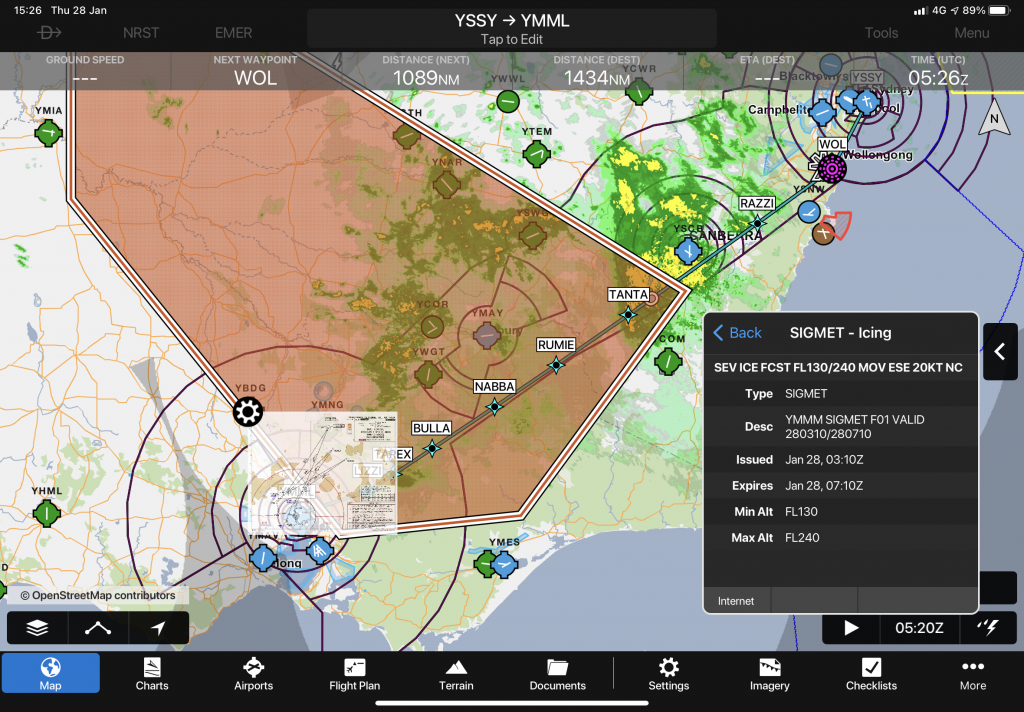 When the Flight Plan is on the map, SIGMETS can be overlaid in real time during pre-flight or in-flight to provide awareness and give instant access to the details and applicability of a SIGMET to your flight and flight path. 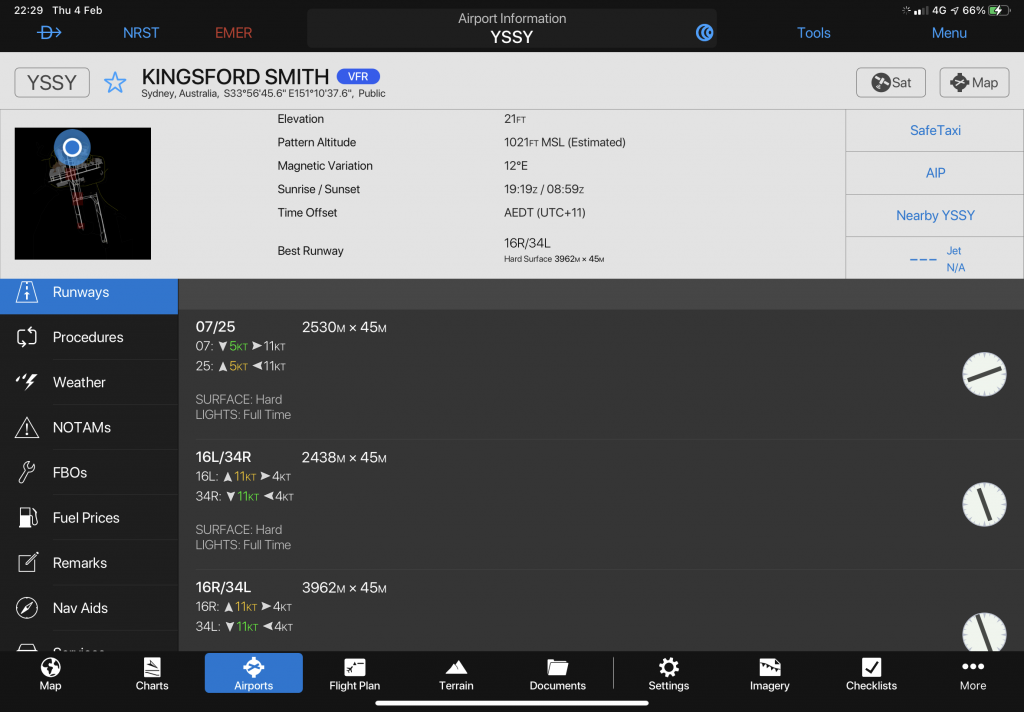 Extensive information is available on airports and other facilities, with quick access deeply integrated into many aspects of the application. 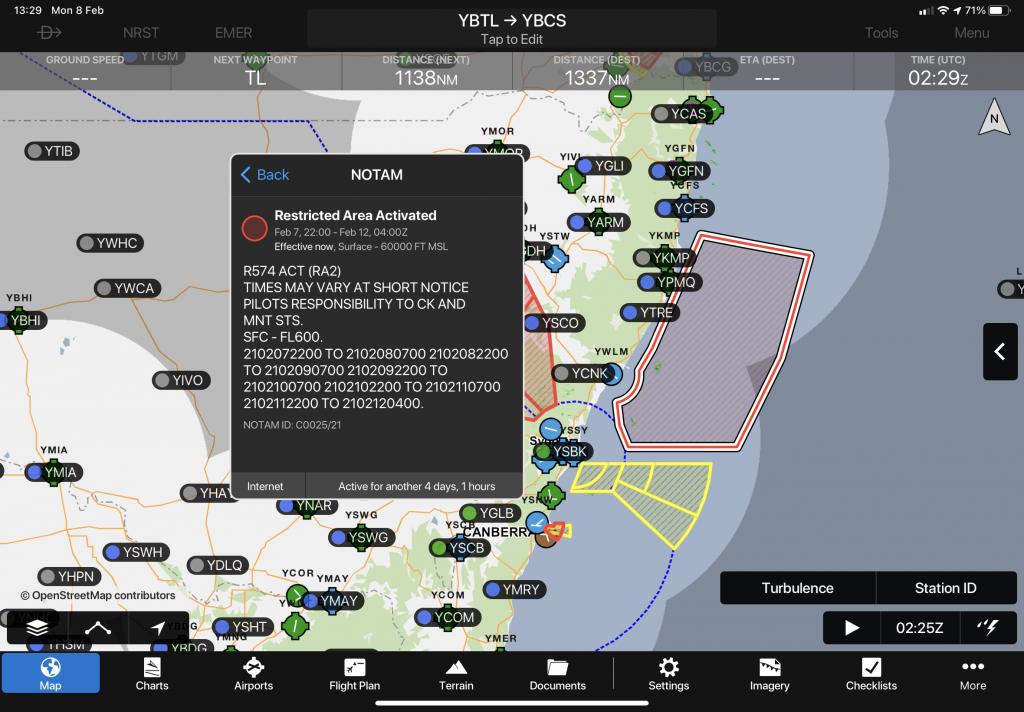 Visual representation of NOTAM data including assessment of applicability (“effective now”) greatly simplifies the assessment of the impact of airspace NOTAMs. 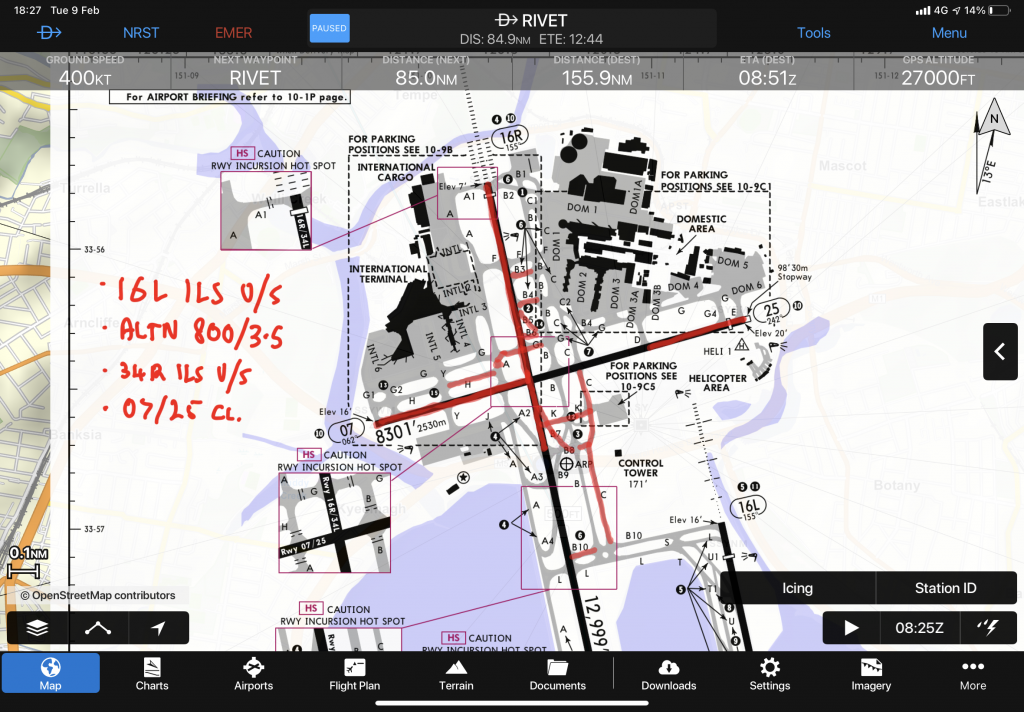 The ability to create chart annotations on any Jepp chart in various line or highlighting colors is limited only by imagination. 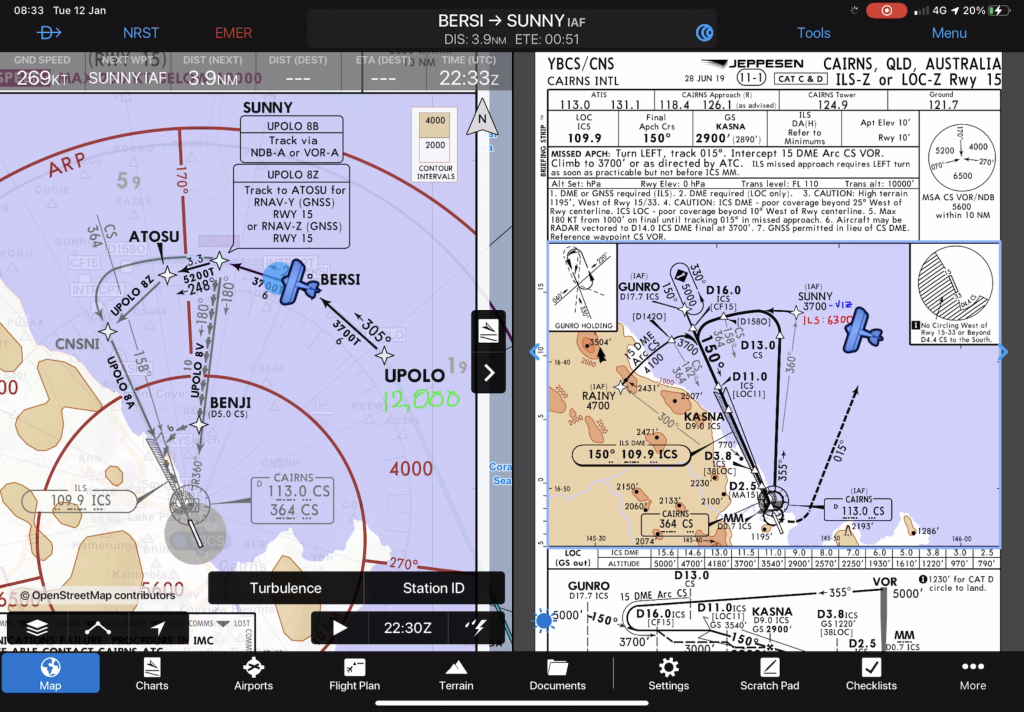 Split screen means not only being able to use two Garmin Pilot feature at once (Map/Checklist; Map/Flight Plan; Map/Profile) – but being able to look at two Instrument Charts at once – with aircraft position on both and the WXR Overlay showing on the Map. Awesome. 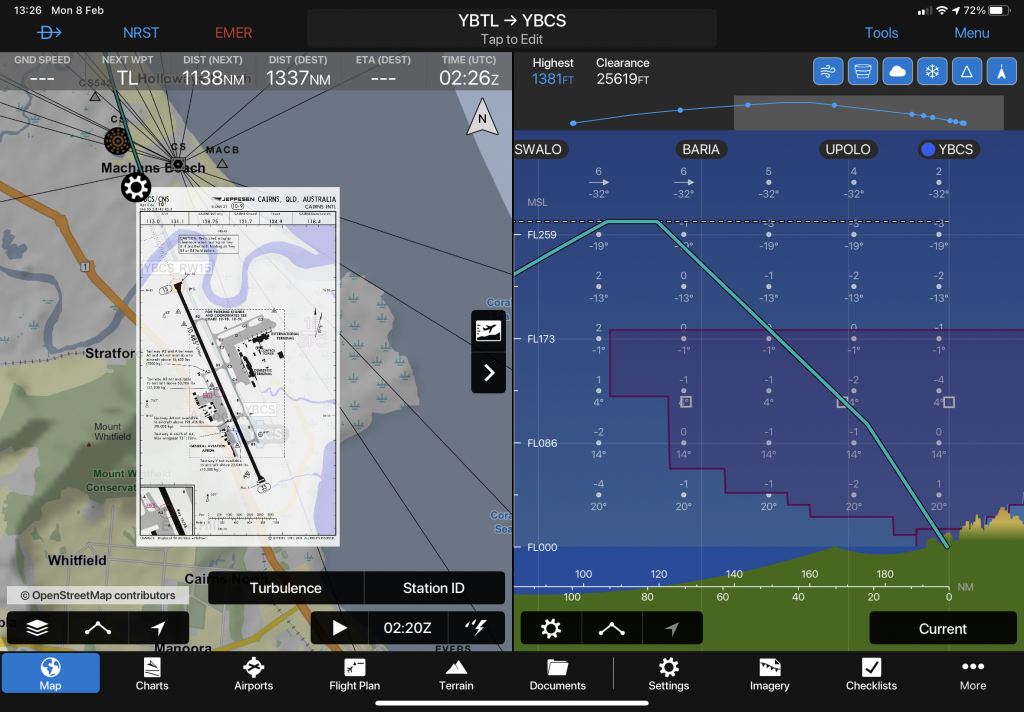 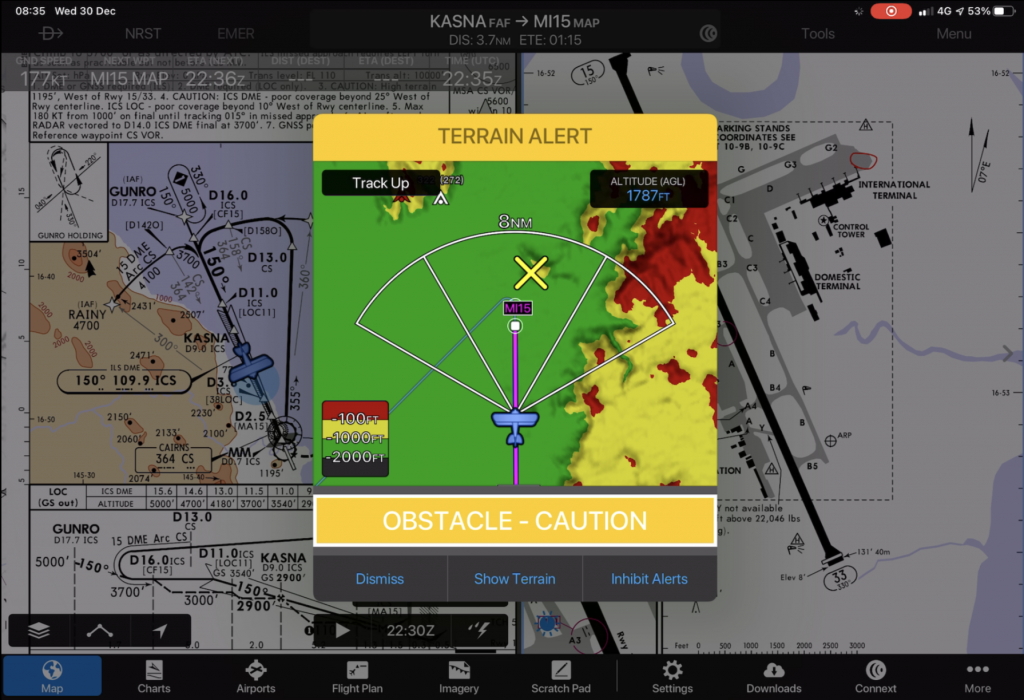