A Balked Landing is the commencement of a missed approach that occurs just before, or more typically just after the aircraft touches down for landing. While not an especially “normal” manoeuvre, it is considered part of the normal sphere of operations for an airliner – certainly within the realm of the Missed Approach or Go-Around event practiced and evaluated regularly in the simulator – and irregularly in the aircraft.

What makes the Balked Landing different is the (very close) proximity to – and potential for contact with – the ground. That may seem a pretty obvious statement, but in many modern aircraft touchdown on the runway automatically commences various landing related activities that are fundamentally incompatible with continued flight. The most obvious of these is the deployment of high drag devices such as Lift Spoilers and the activation of Automatic Braking – and the not quite so automatic deployment of Reverse Thrust. But there are some more subtle activities taking place in the software of the aircraft, and the software in the mind of the pilot as well.

In short – once you hit the runway after an approach, from an aeroplane design/systems and crew procedures point of view – it’s all about The Stopping. 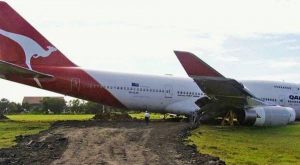 So – why change your mind? There are several reasons – most of them unfortunately resulting from a combination of factors that include mishandling of the aircraft; various environmental factors; and/or operating into performance constrained airfields (short runways). As much as the Missed Approach or Go-Around is the Get-Out-Of-Jail for an approach that isn’t going so well – and the Rejected or Balked Landing is your escape from a Landing that looks like earning a similarly bad outcome. Most Australian pilots are very familiar with the QF1 Bangkok accident, so ably detailed in the associated ATSB report.

Another factor underestimated is that the decision to commence a Balked Landing is often the result of high pressure time constrained assessment and decision making.

So after what may have been a decent approach in difficult conditions, the landing/flare has not resulted in the expected placement of the aircraft along the runway, and the pilot now has concerns about the amount of runway remaining to pull up in. This assessment of landing distance available vs required is often highly subjective and has historically resulted in runway overrun accidents – so the Flight Safety Foundation (with their ALAR toolkit) attempted to mitigate the subjectivity of such just-in-time assessments by introducing the concept of an easily identifiable hard point along the runway which is pre-briefed. If the aircraft has not touched down by (Taxiway XXX, the 1500 ft markers, first third of the runway, etc) – a Go-Around will be commenced irrespective of how much runway actually remains. Most airlines now have this as part of their stabilised approach criteria or in some similar fashion. What this amounts to is that should you miss your aiming point by not all that much (relatively speaking) – you are expected/required to abandon the landing and execute the balked landing procedure, despite the length of runway ahead.

Conflicting with this ideal world requirement is the visual and mental impression of a few kilometres of runway ahead of you (more than adequate stopping distance available) – versus the third of the runway behind you and the Company/Manufacturer/Regulator imperative to abandon a landing you’ve finally got control of and take the aircraft back into the sky. All backed by the knowledge that the processing of aircraft data after you’ve gone home will reveal the the airline safety department the scenario you found yourself in, and the choice you made in the moment.

I’m playing devils advocate here. I fully support the concept of pre-briefed hard points to abandon landings that might lead to runway overruns – but it’s not hard to understand why some pilots make a real world decision to continue such a landing, and almost all of those decisions result in safe landing that stops well short of the end of the runway. My reference to an “ideal world” here is also one in which rejecting the landing when plenty of runway is based on the axiom that pilots don’t screw up go-arounds, and more particularly balked landings. Just like abandoning an unstable approach at 1,000 ft or 500 ft assumes the same thing.

Add to this the limitations of our simulator devices (it’s surprisingly difficult to put a pilot into a position where a well flown approach goes very badly very late in the arrival to the point where a Balked Landing becomes required without dedicated software scenarios) – and you have all the elements of a potential accident.

Probably the biggest factor for the 777 is the inhibition of Auto-Throttle and TO/GA switches after touchdown.

For the 777 and most modern airliners the inveiglement of Automation into every aspect of operating the aircraft becomes a negative factor for the pilot when oft-relied on automation suddenly fails (or more accurately – responds as it was designed to but against the expectations of the pilot) and the pilot flying is required to quickly revert to manual control. In the very short time it takes for the 777 systems to register the aircraft has landed the pilot goes from an aircraft with that will respond quickly to a TO/GA Switch command to Go-Around (Pitch, Power, etc) – to an aircraft that will not respond at all.

As such – the new Balked Landing procedure is a fully manual flight manoeuvre that requires the Pilot Flying to override or ignore automation to get the job done. Quite unusual in the 777.

Until recently Boeing referred to this manoeuvre as “Rejected Landing After Touchdown“. We have been trained in and evaluated it in the 777 since the aircraft was first flown. The 777 aircraft design lends a few eccentricities to the series of actions required to successfully reject a landing after touchdown – I cover these in the Boeing 777 Procedures and Techniques Document, and you can find specific content in the post 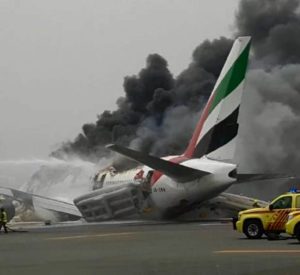 Since this article – Boeing have split the basic procedure into Rejected Landing (before touchdown) and the new Balked Landing procedure.

The previous procedure was essentially a “Normal Go-Around” and (nominally) identical actions were take to initiate the manoeuvre before and after touchdown. From a procedural design point of view – having consistent procedures between the Go-Around and Rejected Landing manoeuvres seems to make sense.

However it now appears that after cogitating the Emirates EK521 Accident Boeing have revised the Rejected Landing After Touchdown concept in favour of the new Balked Landing Procedure. The biggest difference? Aircraft Configuration – Flap.

If the aircraft has not touched down then essentially a “normal” go-around procedure is commenced. The “Rejected Landing” Procedure is the standard Go-Around and Missed Approach procedure as described in the FCOM/QRH. 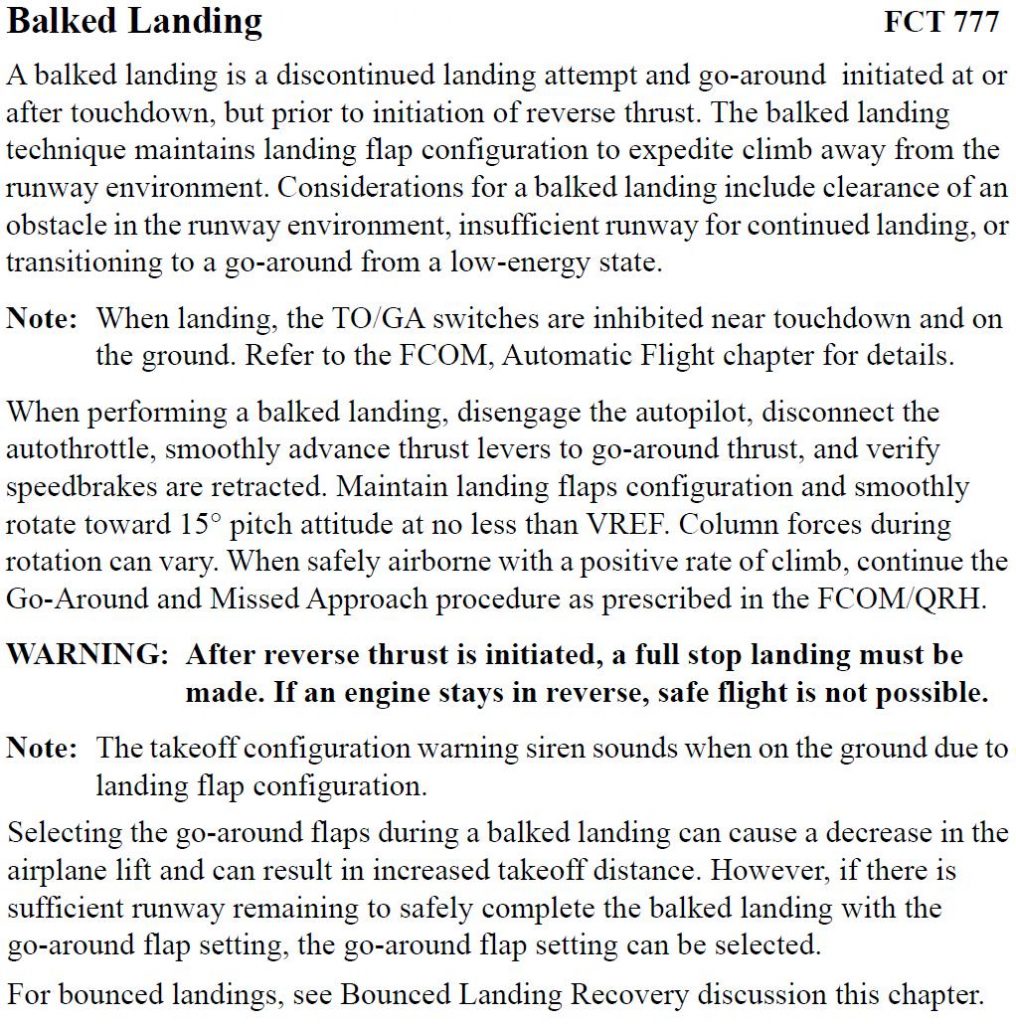 A balked landing is a discontinued landing attempt and subsequent go-around initiated at or after touchdown (including speed brake deployment) – but prior to the selection of reverse thrust.

Reasons for this are few but included in them would be a late landing with potentially insufficient runway to complete the landing roll safely.

As always – the selection of reverse thrust commits the aircraft to the runway.

The FCTM documents the Balked Landing procedure and the following points should be noted. Several airlines have implemented their own version of this generic procedure.

After airborne, transition the Balked Landing into a normal go-around manoeuvre “Go-Around, Flap 20” … “Positive Climb” … “Gear Up”. Activating the TOGA switches will provide appropriate  TO/GA   TO/GA  Flight Director guidance and reinforce the thrust application that has hopefully already been accomplished.

So – what has your airline done with this change?

« Garmin Pilot – Introduction Electric Airplanes Are Beginning to Take Off »