Recently I began Living The Dream. Yes that’s right – I have an iPad without giving any money to Apple. Not counting the Apps, anyway. Recently my company became perhaps the last airline in the country to equip it’s pilots with iPads, and so the choice not to choose Apple was removed from me. 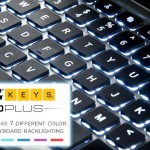 As a consequence I have tried to do my best and jump in with both feet and embrace it. Apart from configuring it for the Company Systems (MDM, E-mail, App Store, Citrix, RSA SecurID, Intranet, etc, etc); I also found Touchdown for iPad (which quite frankly is nothing like as good as it is on Android); and Pocket Informant for iPad – which is actually pretty good. I picked up a Zagg Profolio keyboard/case which while having many great features, I mainly love because it makes Halpin jealous.

Then I decided I wanted Outlook to sync with iCloud. Two weeks later, I’m still recovering from that foolish flight of fancy.

The download and install seemed straight forward. I configured for my specific folders in Outlook for Calendar, Contact, Tasks. After the obligatory reboot I let it run a sync, then had the ipad sync, and Presto! Tasks, Calendar and Contacts on the iPad – and syncing as well. Magic.

I was actually singing Apple’s praises for at least 14 hours. In order to synch Outlook to Google, I eventually had to purchase third party software (I recommend Fieldstone software’s gSynchit) as Google have progressively wound back their syncing services. Getting something from Apple that actually works was a refreshing change. 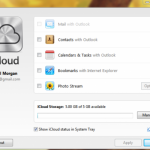 I might add at this point that EVERYTHING is in my Outlook. Calendar going back almost 15 years; Tasks covering everything from calling scheduling next week about a trip, to passport renewals, car registration,vaccinations, you name it. My Calendar is both a diary and a planner and the items in it are categorised between Personal; Company; Family; etc. My logbook is in there; records of meetings; on and on. Yes – I have backup (in fact a backup history).

It was about this time that I noticed that suddenly I had no contacts, calendar or tasks on my Android phone and Tablet. It had the usual Google+, Facebook, Linkedin, etc contacts – but everything that was MINE was missing. I logged into Google Calander – all calendars (I have 4 mapped across using categories from Outlook) empty; contacts missing; tasks gone. Then I checked gSynchIt; that seemed to be working fine. Then I looked into Outlook.

At this point you need to know that while you look ultimately at a folder structure in Outlook (which contains specific folder types for Calendar, Tasks, Contacts, Notes, etc – as well as custom folders) – everything is ultimately inside a single PST file on your hard drive. This is both a convenience and a curse for backup – making backup simple, but historical backup very difficult – My PST can grow to 2GB+ at times.

So I go looking to see what is happening inside Outlook and then I discover what iCloud has done. Not only has it created an entirely new PST file (which is not of course (as an aside) in my backup path), but it has created new folders for Calendar, Tasks and Contacts in it – then bloody well MOVED (not copied) all my calendar, contacts and task items across to the new PST file. But since I synch to Google from the main folders (now empty) this deleted everything off Google Calendar, Contacts, Tasks.

Recovery was not simple either – I spent some time reading help articles (not on Apple’s web site) on recovery and even after I took backups and moved everything back, restoring the synch relationships and finally un-installing iCloud – I then found that the history of typed e-mail addresses pointed to contacts that no longer existed. I had to delete this history in total, building it up again over time. Even now when I type in Halpin it refuses to resolve the name into a default e-mail address, forcing me to manually resolve and select each time. Clearly this is Paul’s fault – I just haven’t worked out how yet.

Naturally it was only after I’d done extensive research on how to recover from iCloud that I read all the posts raging against how Apple have decided to implement synch between Outlook and iCloud. After 15 years of mobile device syncing with Outlook (starting with Activesync and Windows CE 1.0 through PocketPC, iPhone (briefly); and many versions of Android – the unmitigated gall of Apple still amazes me. Although I know it shouldn’t.

As bad as all this is; it could be worse; I could be trying to do it through iTunes. God Forbid.