Some time ago I wrote about a review of a Decision Making Model (FORDEC). During that article I clarified that there is a clear difference between a Decision Making Model versus a Non Normal Management Model. Usually you have to deal with the NNM first before you get as far into the flight as having to make real decisions with conflicting information and requirements. I’m using ANC AAM – Aviate Navigate Communicate – Assess Action Manage.

(a) Diagrams are NOT my forte; and
(b) I’m NOT doing anything new here.

Many pilots, in most situations, have no need of a non-normal management model to follow. Their training, practice and experience combined with SOPs and the support of a good PM/PF to take them through most NNM events to a good result without incident.

However outside of these beneficial influences, pilots at the beginning of their careers; pilots who don’t benefit from a common structure that promotes functioning as part of a team on the flight deck; pilots new to type, to a set of SOPs, to a Company; pilots experiencing a NNM the like of which they haven’t been directly trained for – in all of these situations a common management model framework brings direction and control to a NNM event. Encouraging both process and flow through the procedures while emphasising the importance of the basics – Blue Side Up; Power + Attitude = Performance; Who’s Flying The Plane?; and all that good stuff.

It must be appreciated that ANC (most particularly Aviate) underpins all NNM management. At no point should the instructor be able to lean forward and ask that terrible question – “So … Who’s Flying The Plane?“

ANC is an axiomatic industry standard to assist crew in task prioritisation at any stage of flight – not just during NNMs.

AAM structures the less immediate non-normal handling sequences for the crew. When a NNM presents (after ANC) AAM inputs flow and process to the next crew response to the NNM event.

Note that at either the Assessment or Management phase the crew may well be required to utilise a Decision Making Model when the correct resolution is not clear to all involved – or especially if there’s conflicting views on the best (that is, safest) way forward.

Change (not as good as a Holiday)

Should the scenario change (such as a change to the NNM; an additional NNM; change to the conditions of weather/fuel/passengers, etc) – the pilot may well be required to abandon the current process (whether in the midst of Navigate/Communicate or Assess/Action/Manage) – and return to Aviate – Fly The Plane.

During takeoff, an engine malfunction (severe damage) results in a failed engine with the additional loss of a hydraulic system. Apart from thrust loss, the primary means of flap retraction has also failed. The PF has dealt with the initial yaw response of the failure and safely delivered the aircraft to 400 ft, where the memory items associated with any applicable NNM checklist would normally be commenced. What do the crew do now?

Aviate : Flight path always remains the highest calling for both the PF and the PM. Power, Attitude and Performance are the active task of the PF; monitoring remains the primary task of the PM to keep the aircraft safe.

Navigate : In this specific NNM – the PF/PM must consider the requirement for any Engine Out Procedure (EOP) to keep the aircraft clear of terrain. The EOP takes priority over everything else other than Aviate. Note that while navigation has come in at 400 ft during this narrative – it’s entirely possible that a turn may have been required earlier to comply with an EOP that keeps the aircraft clear of obstacles close in on the takeoff flightpath.

Communicate : Communications can be a priority for several reasons – whether to advise the intention to deviate from clearance to satisfy the requirements of the EOP; or to ensure that ATC are in the picture to be able to offer assistance when it becomes required. Of course, Aviate/Navigate remains a priority over Communicate.

Assess : Having ensured ANC, the crew now need to assess the required response to the NNM. In this situation, this is a formalised assessment of the EICAS and engine failure indications as well as any immediate requirements of a hydraulic system loss (this is a 777 – there aren’t any). In this situation – it’s a formalised assessment of EICAS commencing with an EICAS message Review (noting both Engine and Hydraulic failure indications) as well as assessing airframe vibration indications. In this case – checklist memory items will be required.

Action : The PF now calls for the action phase, “Engine Severe Damage Separation Left Memory Items“. Both crew are involved in actioning the checklist memory items. As always – ANC remains paramount with both PF and PM required to ensure/monitor flight path and compliance with the EOP during the Action phase.

Manage : Management commences after the required Assess/Action responses to the NNM are complete. By this time the aircraft is clean, clear of terrain and any relevant NNM and NM checklists are complete. Management at this point necessitates Decision Making – in which FORDEC may be required. The aircraft is damaged, with a landing performance impact from both the engine and hydraulic failures. These and other Facts?such as weather and terrain will require the crew to determine and evaluate the available Options?and the?Risk/Benefit to flight those options present, before agreeing on a Decision as to a course of action. Once a decision is reached the crew will Execute the decision along with all the necessary communication of intent that implies. Any good decision making process requires follow up and at some point the crew must implement a positive?Check that the outcomes are as expected. 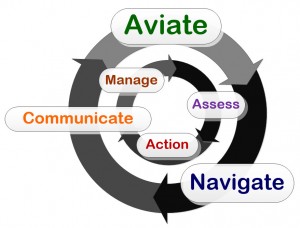 ANC and AAM do not exist in isolation. ANC overrides any sequence of events from the beginning to the end of the flight. AAM is continually in use during various phases of flight in response to stimuli external to the crew – for example:

The 777 EICAS incorporates AAM principles as part of the EICAS Review / Memory Items / Checklist / Notes /Non-Normal before Normal methodology. During the above scenario, EICAS prompts crew during the takeoff (within the bounds of takeoff inhibits) with a series of alert messages (Warning, Caution, _Advisory) – some of which have checklists, some of those checklists require early completion of memory items. ANC requires that crew ignore these during the first critical phase of flight to 400 ft (unless Aviate is compromised). At 400 ft with ANC established the crew Assess the need for a response and Action the required memory items.