So having completed my type rating on the BAe 146, the next step was 5 days of Safety and Emergency Procedures training at the head office in Bankstown. 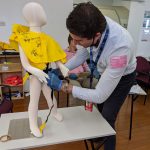 All pilots are initimately familiar with the yearly requirement to complete SEP. Typically it’s a day of briefings and presentation, a re-familiarisation with the cabin emergency equipment that we hardly get to use (ranging from Fire Extinguishers to the humourous yearly requirement to correctly fit an infant life jacket onto a doll of some sort). There’s evacuation drills using a mockup of a cabin door and then some scenarios run in a “Cabin Trainer” – essentially a physical fuselage mockup of the aircraft with rows of seats, galleys, doors, emergency escape slide/rafts etc. It’s focusssed, purpose built, timely training … for the Cabin Crew.

Because that’s what it is – the pilots are basically along for the ride. As much as 80% of the day is devoted to the cabin crew and decent chunk of the remaining pilot focus is the exam. I’m not saying it’s not worthwile, valuable refresher training. I’m just saying it like it is. 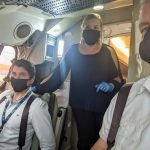 But what pilots who have been on a fleet for a while might not remember is Initial SEP. I’ve just completed 4 days of initial SEP training with five other pilots. To say that the training was entirely focussed on us would be an understatement. While there were some components of the course that to my mind remain questionable (I mean, run me through the scenario where we ditch the aircraft, I burst from the flight deck to find the forward cabin crew/member incapacitated and I am immediately required to seize the nearest infant and fit a life jacket … actually don’t – I don’t want to think about it.) and at some point someone in CASA needs to appreciate the difference in the need to train someone in everything vs the need to assess competency in specific aspects of the operation … but I digress.

All that aside, the training was excellent, perhaps the best I’ve received in my career so far. Friendly, approachable, competent, knowledgeable, and willing to take on any and all outlandish (and occaisionally huymourous) inputs – our instructor Jo was fabulous. 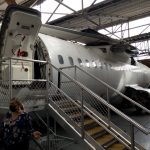 For a small company (actually for any company) a significant investment has been made in safety equipment. This includes their own post-aircraft Cabin Trainer for the BAE146, which must be the only one of it’s kind in existance. A engineering/tech wizard has rebuilt this thing and wired it up from scratch to function like the plane (from the cabin anyway – I tried to start the non-existing engines and nothing happened, but then that could be me …). This thing is just sitting in the hanger at the back of the office and it’s incredible. 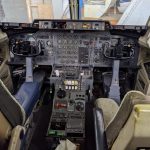 They’ve even gone to the trouble of replicating a fully representative flight deck. No cutouts of panels or post-it-notes saying “Engine Panel” here. Without a thorough second glance (or the view of the hanger through the windows), you could mistakenly believe you’re on a flight deck. It’s amazing.

As well as the aircraft mockup Cabin Trainer, there’s a dedicated door trainer we could practice on. 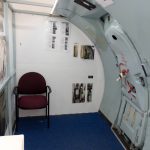 Yelling … “EVACUATE EVACUATE EVACUATE … UNFASTEN SEAT BELTS … FIT LIFE JACKETS … HIGH HEELS OFF … LEAVE EVERYTHING BEHIND.” while putting your own life jacket on; checking the door is/is not armed; assessing outside to ensure everything is clear, opening the door with both hands (it’s heavy) then transferring to a single hand to swing it out and latched as you hang onto aircraft so you don’t go with it … is not as easy at it sounds. It’s two things at oncee, like walking in a straight line and chewing gum. Ok, maybe it’s just me then. 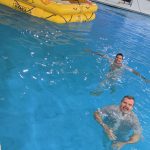 With initial SEP is the obgliatory wet water drills with prooving you can still swim, clambering to haul yourself from the water over the side to land like a beached whale in the middle of the raft (definitely not as easy at it doesn’t sound), swimming a few laps, treading water without the life jacket, defalting/inflating it, splashing the smug instructor on the shore and other necessary life skills. All in overalls that are about 2 sizes to small for your nether regions that shrink when wet …

There’s a written exam with requires 80%, and a plan diagram of the aircraft that requires 100% completion of all safety equipment stored throughout the flight deck and aircraft cabin. 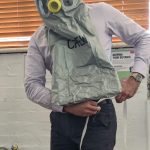 Then practical assessments with scenario based evaucation on land and water in passenger and cargo aircraft. Included in this is assessment of operation and precautions of use of the specific equipment.

While busy – upon reflection the 5 days wenyt pretty quick, mostly down to Jo and the 3 other wonderful pilots I was on course with, who took my incessant picture taking in good humour.

Next … Off to Germany to ferry back a BAe146. With a four hour range and two pilots, it’s going to be an adventure.