Ok, so if you’ve read some of what I’ve written in the past, you’ll know I’m not actually pro-Apple. Let’s get that right out in front, so we can move on with what I want to say.  Because what I want to talk about is a recent Apple tech support query which was … downright pleasurable.

That’s right, you heard me – pleasurable. And no, I haven’t lost my mind. Remember – it’s all comparative. If you’ve ever rung Optus tech support with an internet issue, you’ll understand what I mean when I say the bar is pretty low. 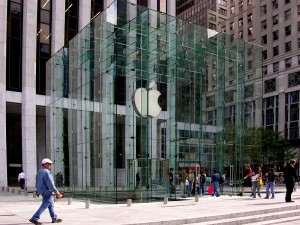 I went through the iPhone decision at the beginning of 2007. I bought one from the Apple Shop it New York (I mean, if you’re going to by an iPhone anywhere, it has to be from the NY shop, just for the kudos).

After using it heavily for several days, I decided that while as a portable platform it was excellent, as a phone it was crap – and I went back and bought a 32GB iTouch as well. I kept the iPhone, returned to Australia and sold it for slightly more than I paid for it. Another IT first.

So we’ve had an iTouch in the family since early 2007. I say in the family because another thing I subsequently discovered is that the iTouch/iPhone was a crap PDA as well. Crappy calendar, no tasks, iTunes (read crappy) sync, etc  – although certainly much improved by the App Store of today.

As such my wife appropriated it in mid 2008, still has it, and she loves it. My eldest son bought one in 2008 based on playing with Meg’s, and finally all succumbed when my other two kids spent their Christmas money early this year on the 3rd generation 8GB and 32GB versions. So the good news is that anytime I want to reach over and check an RSS feed, Twitter or another of the things the iPhone is great for, I can borrow one quickly. Up until now, the iTouch’s have not missed a beat – up until now.

You see the brand spanking new 8GB plays any video we throw at it through iTunes. The equally new 32GB will not. Both of them are connected to the same computer, downloading the same videos from the same (up to date) version of iTunes, both have the same firmware version. Both play YouTube videos. Hmmm.

So I rang Apple support. It took me only a couple of minutes to find a number for Oz Apple tech support. Two presses of the phone buttons and a I got a human being (I didn’t even have to use GetHuman) who’s primary language was English (American English, but I’m not about to be picky). He was polite without obsequiousness, after listening clearly appreciated (a) the level of technical competency he was dealing with; while (b) not skipping over asking me the obvious steps to make sure. The culmination of the first call was to update my iTunes and iTouch to the latest firmwares, fully admitting that this was unlikely to fix the problem,  but would establish a baseline. He then advised that I completely reset the 32GB to basic spec and try the synch again.

Which I did, without successfully achieving anything new. Still no video. Second call to support – even if just to see if lightening could strike twice. Two Rings, Two Button Presses – someone new but still someone who pulled off a good I-can-speak-English-and-spell-Apple-iTouch impression. My case number brought a quick review of what had been discussed to date. Very little covering of old ground and we were onto more discovery.

The culmination of this was returning the iTouch to Apple. Meg bought it through Amazon.Com and I picked it up in the US. I’ve bought things in different states in Australia (different stores in Dubai) and had issues with return. The Apple rep however found my nearest support store (in the local Westfield Shopping Monster) and gave me a reference number. I dropped off the iTouch and apparently I will have a replacement sometime early next week.

What is going on here? If there’s one thing we’ve all pretty much grown accustomed to over the past 5 years, it’s that phone tech support no longer exists in any practical, useful form. Any time you ring tech support – particularly for a large multi national conglomerate like Apple – you’re going to be on one end of a crappy VOIP connection to Hyderabad or Bangalore (both of which I have actually been to) – and if you’re really lucky then you be further routed to a subcontracted solution somewhere in Africa. It will take 10 minutes to communicate your name, along with 5 irrelevant questions about either yourself of your equipment, before you’re subject to the scripted response of “have you rebooted your computer, the modem, your wife, etc.

I feel like I’ve traveled back into the 8o’s. Back when tech support was as often as not provided by at least technicians trained by those who built things, if not real technicians themselves. Where you spoke to someone who could not only pronounce Modem, but could spell it and probably knew what it actually stood for (Modulator/De-Modulator for those who are curious).

Although, why on earth I would want to go back to the 80’s, and if I did, why on earth I would ring tech support I have no idea. That’s like one of those weird nightmares where you dream you’re on a date with (insert your own personal fantasy) and spend the entire time asking her about her personal life and what her solution is the deforestation of the rain forests. It just makes no sense.

I have Two Questions.

Is Apple that different? My tech support experience with them is nothing like anything I’ve seen for at least 5 years. Is this the beginning of a trend back towards genuine product support and value for money – or is Apple just a stand alone player. I know from bitter experience that you just can’t get anyone at Google. Which I guess is a bad thing really – when it comes time for Google to finally reduce operating costs by farming tech support out to Bangladesh, it will be unable to – there doesn’t seem to be any. Could I have been so wrong?

And finally – do we as customers and users have a right to expect an appropriate level of either paid or unpaid tech support? It seems to me that we have given up on those rights. In the last 18 months I have called Optus, Linksys, HP, Amazon, and several others. None of those provided what I would personally consider a good (read 1980’s) level of tech support.

What do you think?