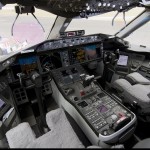 The 787 is coming to the east coast of Australia next weekend. While Qantas will be making the most of the flying visit, Virgin Australia will be visiting Boeing’s impressive new aircraft as well.

I’m planning to pop up to Melbourne and see the plane – I’m waiting to see if there’s any spaces in the list Virgin Australia is defining of who from our organisation will get to go see the aircraft.

Marty in the other hand, is going for a fly in it. More on that later.

I was sent this recently – it’s an interesting insight into the aircraft from a senior pilot converting across from the 767. I can’t swear to the accuracy of the following, but it makes interesting reading all the same.