In September 2020 after 20 years on the Boeing 777 – I commenced a Type Rating training course on a new aircraft type. This series of blog posts (Ha!) tracks my progress (or lack of) through that tumultuous exercise. Having trained (helped) many others through this exercise over the last 20 years – it was time to do it myself.

Originally, this was going to be a series. I was going to build posts as I went along through the course and document my progress towards completion.

What I have found is that all the things I’ve said to my students in the past were very true for me. A Type Rating is a Fire Hose of information. In four weeks I completed:

Interspersed were a few days off where we drove back out the the sim centre and sat in the device as much as we could to get ourselves across the flight deck and associated normal and non normal procedures.

There was no time for blogging.

Background – How did I get here? 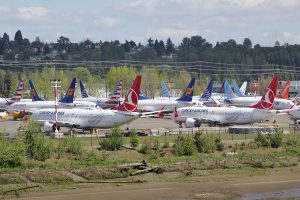 In early 2020 COVID-19 began it’s decimation of the World, taking along with it 90% of the Airline Industry. While the outcome was deadly for some, devastating for many – for me personally it meant 7 months of living off accumulated leave assisted (not really) by the Australia Government’s JobKeeper system, as well as some casual work producing Microsoft Excel spreadsheets (how the mighty have fallen …)

Speaking of Devastating – let’s return to the Airline Industry.

As I write this, approximately 4,000 people have lost their jobs at Virgin Australia – including the CEO. For me this came in mid August when it was announced that the new Virgin to emerge from the Crisis would not have an International arm – No 777’s, 330’s – so all the crew and related staff – gone. Coupled with this announcement was the elimination of the smaller turbo-prop ATR and that associated workforce as well. All this was preceded by the elimination of hundreds of Virgin NZ and Tiger staff months before. For me R-Day was October 3rd.

I find myself an International Pilot in a world where there is precious little international flying. The likelihood for employment prior to a meaningful recovery of international travel is exactly zero. From what I can see – International Travel is several billion doses of a successfully delivered vaccination away.

So much for International. Domestically – well, I am not endorsed on any of the aircraft flown domestically in Virgin Australia (or for that matter, Australia). But that hardly matters. My ex-communication from Virgin is driven by the fleet I was on when COVID hit, and nothing to do with any capacity to transfer across to a domestic fleet. Like many, many others my immediate circumstances are driven by where I was standing when COVID stopped the music playing.

So … any future in International Aviation is years and years away. For personal reasons, that is likely to need to be in Australia, which basically means never. Domestically things aren’t much better with hundreds and hundreds if not thousands of Australian pilots out of work from Carriers across the globe.

So … A Type Rating 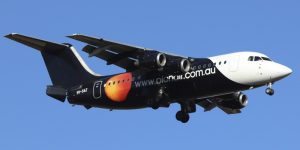 So here I am commencing a Type Rating on the British Aerospace 146 aircraft. I have no previous exposure to this aircraft – never flown it, never flown in it. I have friends who have who either have it in their past and are free to disparage – or not. I myself will demure from anything negative about what is soon to (hopefully) become my home in the sky and the means by which I pay my bills. Suffice to say – after months and months on the ground I am looking forward to launching into the atmosphere in the Five-Hair-Dryers-In-Close-Formation wee beastie.

Typically you don’t get study material prior to commencing a course of study in Aviation. There are contractual and legal reasons for this – none of them very good when you’re looking to get a head start on your course. I managed to get a hold of a set of Flight Crew Operations Manuals (FCOMs) for a representative aircraft and began study. This includes:

Having flicked through all the available material over the course of a few days I set about establishing a plan of action for the detailed review and construction of study material.

These actions serve the useful function of delaying the actual study program enough for you to be (more) mentally prepared for the actual activity of studying. 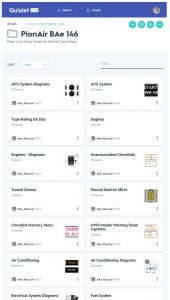 While I found some CBT on YouTube – it’s for the Rejional Jet (RJ) version of the aircraft which is the BAe146 corrected for earlier shortcomings. BAe146 with FADEC; BAE146 with AutoThrottle; BAe146 with Autoland. BAe146 with Digital Engine Instrumentation. BAe146 with EFIS. So while the CBT gave me some background – in the end it also had some contradictions which didn’t help …

I was casting around for some kind of tool to assist with creating memory and recall. I finally settled on Quizlet. As I prepared for the course I set about making a set of long term notes and revision material that I can come back to over my life on the aircraft to keep on top of systems, factoids, checklist memory items, limitations, etc. I included images in these to try and keep the interest up. If you want to look through them, you’ll find them at the following link:

Some more points about the BAe146 … 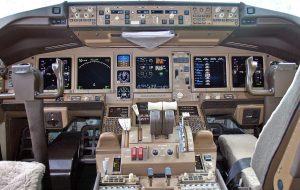 Look I don’t mean to be negative about the British. Quite frankly I think best British TV is superior to practically anything else, with some notable exceptions. Having flown both Airbus and Boeing in my past – I know that: 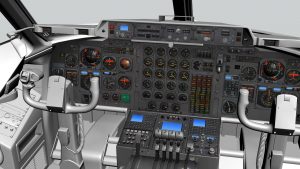 Yeah there’s no pattern there. Some switches are 2 and some are 3 positions. Those positions include ON, OFF, AUTO, SHUT, OPEN, NORM, START, STOP, FAST, SLOW – if you can think of it, the BAe146 has a switch/position for it. And in many cases ON is one direction for one switch but in the middle or the other direction for another switch not that far away on the overhead panel. Far Out. 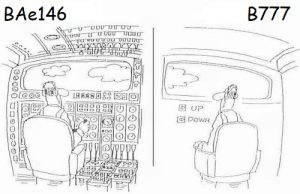 I’m reminded of that story where a brand new Cabin Crew member walks onto the flight deck and tells the Captain how in awe she is that he knows what all the switches and buttons do.

“What switches and buttons do you mean?” he queries?

She points to the roof and says “Well, all those for a start.”

The Captain looks lazily upwards, his eyes widen in fear and he says “Good Lord – what on earth are all those for?“

All of this is part and parcel of converting from one flight deck to another, as you can see here. 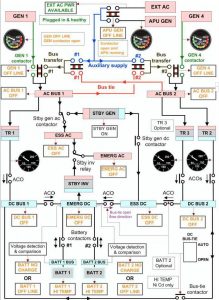 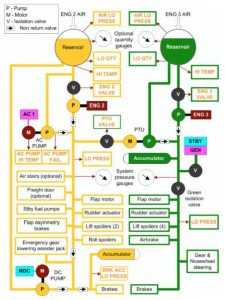 And again – it’s not about complexity. The 777 is an incredibly complex aircraft, as all modern aircraft are. It’s just that the manufacturer made a conscious decision to identify what pilots needed to know; what might be nice to know – but more particularly, what we do not need to know – and then they decided not to tell us that.

My impression of the BAe146 FCOM is that no-one ever took on that task. There is shite in the BAe146 FCOMs that I suspect pertain to aircraft that ceased to exist before the commencement of this century.

This last part is important as well. There are at least three models of the BAe146 (-100; -200; -300) and then there are QT (Quite Trader, the Freighter); QC (Quick Change – between Pax and Freight); and the pure Pax version. So in the worst of all possible cases – six different types of BAe146 to know. Except that it seems like almost every BAe146 is different to the next one, even if they’re the same model/config. And then some have thin generator cables and so certain electrical switches are limited in their use – and some do not. Everything from Airspeed/Altitude limitations through to procedures vary depending (almost) on the specific aircraft (Registration). It’s fair to say that at this point – that’s just scratching the tip of the iceberg.

In the end I completed my Type Rating successfully; then the Instrument Proficiency Check (which was an event all of itself); followed by the Operator Proficiency Check. It’s on my licence and now I’m officially a British Aerospace 146 Captain. Or at least – I will be when I can find one. Standby by for the details and photos of my first flight.