Firstly, it has to be said that most of the time, this is not a good idea. Broadly speaking Aircraft Manufacturer checklists are designed to be followed and not second-guessed. When you’ve lost all your hydraulic fluid, and therefore hydraulic pressure, and the checklist tells you to turn first one and then another hydraulic pump from AUTO to ON – you know this isn’t going to work. So why do it? Let’s just ITEM OVERRIDE this step and get on with the NNM. At this point, your instructor will (hopefully) lean forward and say something along the lines of “Stop thinking so hard – you’ll hurt yourself (or something else) … do the checklist items.” Harsh, but sage advice.

But while most of the time we are taught to robotically work our way through the checklist – there are times when the PF/Captain really needs to understand what a checklist is trying to achieve. NNM checklists are broadly speaking flow charts – and the critical points are the Yes/No decision points. These points in effect allow the crew to determine the flow of the checklist and what state the aircraft will end up at in respect of the NNM. This question in the Eng Limit/Surge/Stall Checklist is just one of those points. Sounds like a simple question, doesn’t – objective enough for you? 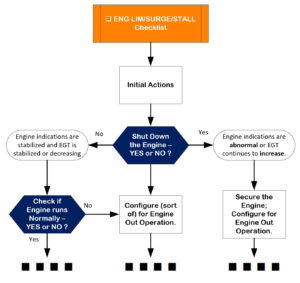 Again, most of the time these Yes/No points are based on an objective assessment and there’s little subjectiveness about them. But sometimes you are being asked more than you realise – a knowledgeable, seasoned 777 pilot knows the true meaning of what these questions are asking in relation to the flow of the checklist, and there are times when less objective assessment and checklist knowledge is a requirement …

In flight, you have a failure where the engine rolls back to idle even as the associated thrust lever stays at the commanded thrust level. In fact, as speed reduces, both thrust levers advance, but the affected engine remains at idle. In this scenario, the engine doesn’t actually fail – no  ENG FAIL on EICAS. What you do you? – Fly The Plane, of course.

But after you run the Engine Failure Analysis, you’ll eventually end up in the Eng Lim/Surge/Stall Checklist, and you’ll be at this question. At this point your engine is running at idle, powering pneumatic, hydraulic and electrical systems. There’s no vibration, exceedance – or EICAS messages.

What’s your answer going to be? Are you Sure?

This question regarding stabilisation and EGT is a cover for what the checklist is actually asking you. To determine that you need to appreciate the question holistically in terms of where the two answers take you in the checklist. Only then can you answer this question in full knowledge of the implications of the answer you choose.

What this question is really asking you is – Do you want to shut the engine down? If the answer is No – then it’s off to Step 4; otherwise, we are shutting the engine down and setting up for an Engine Out aircraft. Note that this is your last opportunity to shut this engine down in this checklist – after this, if you need to do so you’ll be doing it off your own recognisance, without configuration guidance from the checklist.

There are a few questions like this throughout the Boeing QRH/ECL and you only really understand them if you armchair fly them and when considering the question – look at the steps that follow your selections. By the way … when I said in the scenario description that the engine was at Idle …

There’s a failure in our simulator where the Auto Throttle system loses the ability to know where the thrust lever is at. Since it doesn’t know what thrust is being commanded – it sets Idle thrust, and this happens as soon as the failure occurs – on Takeoff, in Cruise, during a Go-Around.

When considering continued flight with an engine at idle thrust – one of the considerations must be … How do you know it’s actually at idle? It’s not like there’s an idle thrust detent on the N1 gauge. If you think about it, the only way you can really know an engine is at Idle is to bring the other one back to idle and compare. Having achieved that – now all you need to do is assume that it will stay at idle, particularly during the flare, where discovering that actually your malfunctioning engine is not at idle – or is not under control – could do serious damage to your landing plans.