TAT and Takeoff Thrust in the 777

Recently I witnessed an interesting occurrence on the line that has resulted in a number of queries to Boeing, and while not all the answers are back, the results so far are fascinating. Eighteen years on the aircraft and still learning, which is actually a nice place to be.

Disclaimer : Normally I try to produce content to engage readers across the spectrum from those with an interest in Aviation through avid Simmers through to other Professionals operating the 777. In this case, the following is unashamedly technical and I apologise if I lose you on the way through – each time I re-read it, I lose myself and change it again! 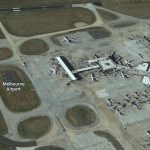 We were parked on stand in Melbourne (YMML; Stand D20) getting ready to go to Los Angeles and while the ambient temperature was 19° and a light northerly blowing, we were heavily loaded and full thrust was going to be required – Melbourne has some hills to the north which reduces the weight you can lift, despite a small headwind component. As the temps get higher in Melbourne, you can get into a weird situation where you’re better taking a small tailwind away from the hills off Runway 16 than a small headwind towards them on Runway 34 – but I digress … for this sector, I was in the jumpseat, conducting an Annual Line Check on the two operating crew members. 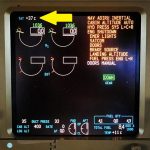 While the TLDC (Takeoff Landing Data Calculator – the computer software we use to calculate takeoff and landing performance) calculates the N1 that we’ll be using for takeoff – in actuality, the performance calculation specifies a Fixed Thrust Rating (TO, TO1 or TO2) in combination with an Assumed Temperature value.

We enter these TLDC calculated Thrust Selections into the FMC and in conjunction with the entered weight and aircraft systems sensed ambient conditions (temperature, pressure) – the FMC calculates the target N1 for takeoff. 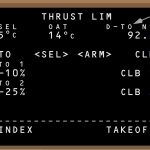 There is almost always a small difference between the value calculated by the FMC and that calculated by the TLDC computer. This comes down to several factors, one being that the Airconditioning Packs prior to takeoff are working at full capacity; whereas they are reduced to a low flow rate during the takeoff roll. This leaves more thrust available for the engine, resulting in a different N1 calculation result. The TLDC computer is aware this is going to happen and calculates accordingly; the FMC modifies the Target N1 once the Packs are reduced during the roll. 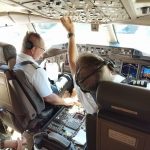 On this day – the difference was more than “normal” – about 1.5% with the FMC calculating a lower value (which typically calculates a slightly higher value). Our SOPs note the difference but have no crosscheck or tolerance as such. In the past, I’ve seen this occur when the ambient temperature is higher on the aircraft gauges than the Airport Weather Service (ATIS) is giving. While we use the ATIS reported temperature in our (TLDC) calculations for N1; the FMC can only repeat the calculation of N1 by referring to the temperature “felt” by the aircraft and reported through the TAT (True Air Temperature) probe. In this case – the TAT indication on EICAS was 37° as against the ATIS 19°. That explained the N1 difference – but not why the TAT indication was so high. 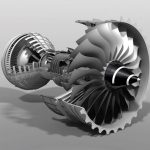 “N1” is engineering nomenclature used to refer to the rotation speed of the First Rotor – in our case the big fan you see at the front. Broadly speaking the rate of spin of this fan is equivilated (another engineering term) to Thrust. The GE90’s have two engine spools, the second of which is (of course) called the N2. The 777-200’s I used to fly had Rolls Royce Engines with three spools, so of course, there was an N3. On modern high bypass engines, the N1 is essentially a huge fan (not terribly dissimilar to the Propellors of old), rotates the slowest, produces most of the actual thrust, and is driven by a connected turbine in the exhaust gas flow at the rear of the engine. The N2 (and N3) spools are all about compressing the air (intake) and extracting energy from that air on it’s way out the back end after that air is burnt in the depths of the engine casing.

N1, N2 and N3 values are given as percentages (for example Red Line Maximum N1 for the GE90’s in my aircraft is 110.5%) because their spin rate differs vastly. The big fan at the front averages 4000 RPM during takeoff; the little one in the middle closer to 13,000. As to why maximum speed is not 100% – I really have no idea, it’s never made sense to me for them not to callibrate things that way. It just is.

The Captain remarked on the N1 difference and we noted the high TAT reading. I’d seen this before when parked and airflow is poor through the TAT probe; but we were facing the Terminal (East) and the probe was actually in shadow, so it still seemed odd. We resolved to re-examine the TAT during aircraft push and engine start; hopefully, the TAT indication would assume a more appropriate value.

On the ground, the TAT indication is considered a valid measure of OAT, but caution has to be exercised if you’re going to use it to second guess the airport ATIS temperature. The temperature reported by the ATIS is essentially a certified value, taken at a specific location, behind a Stevenson Screen, monitored, crosschecked, etc. The TAT probe … is not. 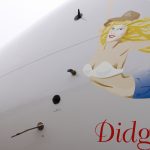 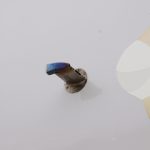 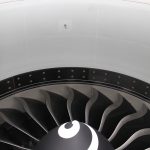 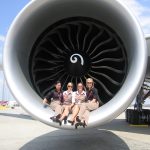 Meanwhile, I started to think about the problem of the numbers we were seeing and what impact it might have if the TAT did not drop down. The TLDC had told us that MaxT (the maximum temperature we could accept to be able to take off with our present load) was 29°, so it seemed to me that the TAT remaining well in excess of that was likely to cause us problems.

Engine start and aircraft pushback did not actually improve things:

But the temperature had dropped a few degrees with the Engine Start, so we decided to continue the scenario (looking behind us to make sure there was no Sim Instructor and this was not a Simulation …) and commenced taxi. During taxi, the TAT indication continue to reduce. 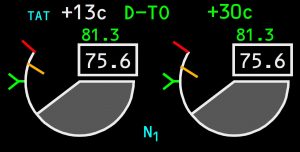 We re-entered our performance data from scratch, double checked everything and proceded for a normal departure. As we commenced the roll I noted that the EICAS was targetting an N1 of 105.5; whereas the TLDC had recommended 105.2 – which seemed pretty reasonable. Interestingly while the TAT had reduced on taxi down to the ambient 20°; it then began to increase while we sat at the holding point and re-entered the takeoff performance. During the takeoff, it reduced once again with airflow until increasing again as is normal with increasing airspeed. The FMC N1 target adjusted accordingly to these variations.

As a footnote – we became airborne normally and survived.

What does all this mean? Good question. As far as I can determine, the above summarises into:

In the aftermath of this, I notified Engineering and while I lost track of the story, I believe another crew experienced a similar occurrence and a problem with airflow through the TAT probe was identified, and corrected. What is impressive in all of this is how well thought out the system involved is, and the technical depth and forethought that goes into account for all the possible things that might go wrong in something as crucial as calculating thrust for takeoff. It speaks to decades of experience in development at GE and Boeing, and it’s awesome.