I’ve been looking at Cold Temperature Altimetry Corrections in anticipation of potentially operating into such environments again in the near future. While my professional past includes operating the 777 to Moscow, Baku, Seuol, Beijing and a few other cold temperature destinations – most of the last decade has been focussed on Australia, Los Angeles, and the UAE. As such it’s been quite a while since cold temperature corrections have reared their ugly head – let alone metric altimetry. To say I haven’t really missed them is understating it.

This one’s for you, Alex AFR!

The last week has been a whirlwind of contradictory opinions and conflicting manufacturer and regulatory guidance in this area. I am now firmly of the belief that I have no answer to the following questions (but I’m continuing to chase down something concrete, and definitive).

As you can see – THIS IS A CAN OF WORMS. I can’t believe that I’m struggling to understand and obtain clear guidance on something that we’ve been doing for Decades (at least). This is really pissing me off.

I thought I had a pretty good grasp on the concept, but as I dove deeper down the rabbit hole and came up hard against the fundamentals of the FMC and VNAV PATH on final approach – I was back to basics in trying to sort out what is required. Fortunately, I had the help of good friends at several other airlines to aid me in my quest. While they have reviewed the following material – any mistakes in what comes next are mine.

As always, the following content is couched firmly in the area of my own “expertise” – Boeing, the B777(-300ER), my airline. Your mileage may vary – but as mentioned I have passed this in front of a number of other consummate professionals across the globe.

Aircraft altimeters and altimetry systems are calibrated for ISA conditions. When the OAT deviates from ISA, an indication error occurs in the altimetry information provided to the pilots as well as the barometric altitude reference passed along to the FMC and other systems. The 777/FMC does not currently have the ability to correct for non-ISA temperature deviations. 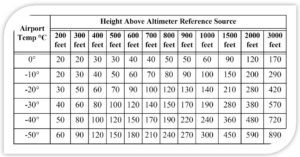 Deviations from ISA in terms of Altimetry are referenced against a ground-based temperature source, typically the temperature on the ground at the departure or destination airport. While it may not be entirely accurate, a uniform deviation is assumed from the ground to the level of the aircraft.
The size of cold temperature altimetry errors is proportional to:

For a Non-Precision Approach (whether driven by the pilot/autopilot using the altimeter or the FMC using a barometric reference) the aircraft will be higher than indicated. Since the error decreases with descent, the height above a 3 degree slope decreases until the aircraft is only a few feet above the required threshold crossing height. In effect the aircraft starts the approach high, descending on a steeper effective angle than promulgated by the instrument approach, which results in slightly higher descent rates and less thrust required. If a visual guidance system is provided the indications will show high on slope to the threshold (see below).

For Precision Approaches (whether ILS or GNSS based), the aircraft flies the commanded 3 degree (or otherwise) slope down to the runway and threshold crossing height. For such approaches, the altimeter will under-read since the aircraft is actually on slope, but the altimetry indications are impacted by the ISA deviation. This is often noticed at the outer marker crossing height check during precision approaches to warmer temperature airports. The minima will require correction for cold temperatures unless RA based (see below).

Boeing do not require corrections for warmer than ISA temperatures, and this information is provided for guidance only.

From a barometric based approach, in non-standard ISA conditions, the aircraft will be higher (warmer) or lower (colder) than the promulgated instrument approach and any provided visual approach slope guidance system. The height error decreases as the aircraft reduces height above the ground and the aircraft approximates a steeper (warmer) or flatter (colder) approach path, which is maintained to the threshold. This deviation from the visual guidance system approach angle will be reflected in the visual approach slope systems indications. 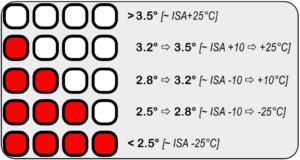 The values shown here are approximates for a PAPI system aligned at 3 degree slope and are for guidance only.

The exception to this is APV (APproach with Vertical guidance) such as RNAV GNSS/GPS with LNAV/VNAV DH minima and RNP AR / RNP LNAV-VNAV approaches. Such approaches come with an operating temperature range on the chart (usu 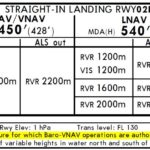 Note that Radio Altimeter (RA) based minima do not require cold temperature corrections.

In colder than ISA conditions, the altimetry system over-reads. When the aircraft is flown by reference to a barometric source (whether driven by the pilot/autopilot using the altimeter or the FMC using a barometric reference) the aircraft is invariably actually lower than indicated. This can lead to unsafe clearance from terrain in relation to all minimum safe altitudes in the departure, arrival, approach and missed approach phases of flight. Boeing requires low temperature corrections when the ambient airport temperature is at or below 0C

Minimum Safe Altitudes (MSA), Lowest Safe Altitudes (LSALT) and minimum altitudes on SIDs and STARs may need to be corrected in cold (Airport Temp At/Below 0º C) conditions. Corrections are based on the Boeing FCOM SP chart with extrapolation in accordance with the guidance provided. Corrections are made based on the ambient airport temperature and the height of the minimum altitude above the airfield elevation. Deviations from charted altitude constraints due cold temperature corrections must be communicated to ATC. Note that some FMC constraints cannot be cold temperature corrected (such as conditional altitudes).

Outside of the CDU LEGS page final approach angle, the FMC drives VNAV vertical path commands through the use of the on-board barometric reference systems, which are subject to cold temperature errors. As such for all instrument approaches, if VNAV is going to be used the FMC LEGS page altitude constraints will require cold temperature corrections. Crew should appreciate the difference between adjusting these altitudes to ensure clearance from terrain (yellow ovals) vs restoring the programmed aircraft flight path to that intended by the approach design (yellow highlight).

Strictly speaking, the Boeing FCOM requires corrections to altitude constraints, although correcting crossing altitudes is a similar procedure. Deviations from ATC cleared altitudes for cold temperature corrections must be communicated to ATC.

Once past the FAF, the FMC follows a path dictated by the geometric angle indicated in the LEGS page, as restricted by any constraining higher altitude in the LEGS page. However the FMC is fundamentally a barometrically driven device, and while a geometric angle is indicated on the LEGS page, in fact the FMC converts this to a barometric path based on the end of path lateral and vertical co-ordinates. As such the FMC flies the LEGS page slope by reference to altimetry, and is subject to temperature error. Since this error is magnified by deviation from ISA and height above the airport:

With corrected FAF (or later) altitude constraints, the FMC calculates a steeper approach angle to meet this increased constraint altitude requirement. Since the barometric temperature error reduces with descent, these corrections will result in the FMC approximating the original promulgated approach angle (while believing it is flying the steeper angle).

In Short :
While nominally on a glidepath – FMC / VNAV PTH flies a barometrically calculated glide path that is subject to non-ISA temperature altimetry error.

APV approaches differ from standard NPAs in that they are constructed similarly to precision approaches with a sloped Obstacle Assessment Surface (OCS) in the final approach, rather than the traditional step-down criteria shown on such charts. These approaches must be flown in LNAV and VNAV, typically to a Decision Altitude (DA) rather than an MDA.

When these approaches are flown in cold temperature conditions, the final approach slope altitudes do not require correction, and the approach is flown from a lower FAF altitude on a shallower approach. The instrument approach chart includes a minimum ambient (airport) temperature below which the lower, flatter approach is not guaranteed to be clear of the OCS. When the ambient (airport) temperature is below the charted minimum, a reversion to LNAV only minima is usually available – but the charted LNAV/VNAV minima must no be used.

For APV approaches, cold temperature corrections are required to all altitudes outside the final approach – IAF, IF and other constraints as well as the Missed Approach. The FAF constraint does not require correction, nor any altitude constraint in the LEGS page after the FAF down to the Missed Approach Point (MAP). The minima while technically a barometric reference (you’re looking at an Altimeter) is protected by the OCS and so therefore does not require correction. On an APV in a cold temperature environment, you’re making your Continue/Don’t decision at a similar geographic location to an ISA approach, closer to the ground – but still clear of terrain (down to the minimum temperature on the chart.