For the past several months I’ve been experiencing a CPDLC anomaly approaching the west coast of the US. Essentially I’ll come back from crew rest and begin preparation for the arrival into LAX. At this point the FMC will reflect the basic OFP route of:

… where EKLEY is the end of the Oceanic area and LAX is of course the VOR at Los Angeles airport.

The problem comes about as I commence my customary preparation for the arrival, which includes selecting a STAR (Standard Terminal Arrival), Approach and Runway. This changes the route and sets off an alarm with Oakland Oceanic Control. An automated system advises the relevant controller that my FMC no longer matches our notified flight plan and eventually this results in a warning message to me on board the aircraft. It’s difficult negotiating/explaining the situation over a CPDLC link – and so essentially I return the FMC back to match the flight plan.

I prepared everything else I could for the arrival – Weather/NOTAM review, Charts, Briefing and the rest of the aircraft setup. Then once we were cleared out of Oceanic airspace – about 15 minutes before top of descent – I entered the arrival details into the FMC, had the PM cross check it and down we went.

The first time this occurred I didn’t think about it very much, but the second time I saw it was as a Check Captain sitting in the back seat, watching the primary crew prepare for the arrival. Essentially the same thing happened, except the crew delayed all arrival preparation activity until the could enter the arrival into the FMC. This meant that the briefing didn’t start until descent was well commenced and the whole thing was a bit of a shambles.

So I called Oakland Oceanic and spoke to the senior controller, who explained what was happening, and what had change to bring it about.

As it turns out, after a number of position reporting errors, Oakland Ocenic activated the alerting system that was now causing us problems. Essentially every 12 minutes (or so) the aircraft reports position via CPDLC to San Franciso Oceanic. This report consists of current position, estimate for the next position, and the name of the following waypoint. Thus on the several hundred mile run into ELKEY – it was reporting estimates for ELKEY and that the following position was LAX, which matched out Flight Plan. But as soon as we changed the FMC to reflect the fact that we weren’t going directly over the top of KLAX airport to the LAX VOR, the automated system still generates an alarm that our FMC doesn’t match the Flight Plan. And so on it goes. 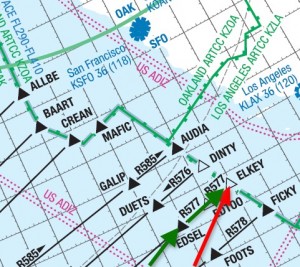 I had an extensive discussion with the Senior Controller and together we realised that the solution was to file via the paired waypoints that complete all oceanic transitions across the Pacific – in this case:

Thus all position reporting right up to EDSEL would not reveal any changes to the flight plan after ELKEY. By the time you get to EDSEL and the problem is likely to occur, you’re cleared out of Oceanic Airspace, talking to SOCAL (Southern California Control) and the anomaly is moot.

I advised my company of this in April. In the meantime there are several options that can be considered to get around this problem.

Our FMC’s incorporate a Route 2 facility.Thus you can build an arrival, approach and runway in Route 2 , then activate it later on when cleared. This allows the crew to setup and brief and prepare for the approach – even check the route in the FMC – without interfering with the active flight plan.

Route 2 has the following limitations:

I haven’t see any progress on this issue since my initial investigation and report in April. On my last flight to LAX, I had an arrival established in the FMC when I went off to last rest. When I came back, it had all been deleted. I asked the Sen FO – someone very experienced and capable (one does not necessarily imply the other …) – what happened to my arrival?

Essentially while ATC had not detected the discrepancy, it turns out that my cunning plan to fool ATC and leave ELKEY-LAX (route discontinuity) – FICKY / STAR / Approach / Runway – screwed up the arrival time shown on the in flight entertainment system, and the passengers start to worry about their connections, so my careful preparations were abandoned. Once again.

Back to the drawing board. Or at least Route 2 for the time being.