Basic Modes Engine Out Drift Down 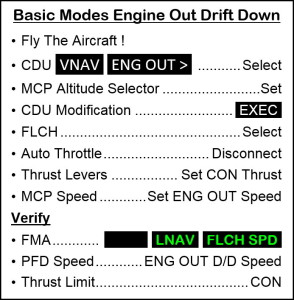 An engine failure at altitude above the maximum engine out altitude, followed by the obligatory engine out drift down is a bread and butter event for a cruise pilot. Typically this is practiced and evaulated using the highest levels of automation in LNAV and VNAV. For more information see Engine Out Drift Down and the FMA. However the ability to execute this maneouvre using basic autopilot/flight director modes is occaisionally tested – and a useful procedure to have when VNAV fails to do what you expect …

There are a couple of reasons why you might find yourself with the requirement to initiate and manage a basic modes engine out drift down from altitude, including a failure of VNAV to behave as expected/required – but the most common reason is because a Check Captain asks you to.

Broadly speaking the procedure required falls into one of two possibilities – when the FMC VNAV Cruise page is available; or when it’s not. When the FMC is there to give you an altitude and speed to aim for, you set those as part of the procedure shown here. Otherwise initial values of FL150 (or higher if MSA requires) and Turbulence Penetration speed are used until these can be refined using the QRH Performance Inflight.

Once VNAV is out of the picture, there are only two modes available for the descent – Vertical Speed (VS) or Flight Level Change (FLCH). 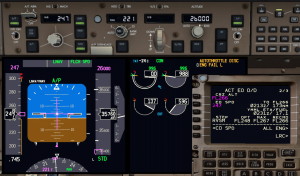 VS would be a high workload solution since fundamentally you are looking for a speed targeting manoeuvre (which VS is not), and without the constant attention of the PF, VS at high altitudes can risk overspeed / underspeed excursions. Hence FLCH is the mode of choice for a basic modes drift down.

If the engine is actually failed (either EICAS [] ENG FAIL or the Fuel Control Switch in Cutoff) then when FLCH is selected, the CON thrust limit will be set, and the PF must move the thrust levers as required to maintain the CON thrust limit. If necessary, the CLB/CON switch should set CON thrust limit manually (but not not the actual thrust setting).

« Standing the Crew Up VNAV Path Intercept from Above »