Early last year, the FAA revised the SIDs and STARs at Los Angeles KLAX airport. I don’t know if I had annual leave or missed any associated documentation, but it’s fair to say that as a fleet that basically operates into the East Coast of Australia and LAX exclusively – it was something of a baptism of fire. There are a number of issues that subsequently developed, and we’re actually grappling with the best way to deal with some of the issues that resulted, even today. Let’s head down the rabbit hole.

Let’s start with a look at two of the typical procedures introduced – the DARRK Standard Instrument Departure (SID) and the RYDER Standard Terminal Arrival (STAR). The following features are worth pointing out for further discussion :

Note : As always, the reproduction of charts, procedures, text, images, etc is absolutely not for operational use or for any commercial gain. Please use this information as the genesis of thought to determine how you and your training/standards department might need to adapt to the issues discussed.

Moving on … the issues above aside, the real excitement that has come from these procedures is in the STARS. Much like the old adage where “Takeoff is easy – that’s just Brute Force over Ignorance – it’s Landing where real piloting skill comes in ...” – the new arrival procedures have presented the most opportunity for workload and stress into the calm, collected, highly procedural arrival experience that has always been a morning arrival into KLAX …

There are several challenges with STARs like this, only further complicated by the inevitable ATC speed/altitude/heading interference and radio workload that comes with any arrival into one of the highest traffic density airports in the world. And speaking of ATC … 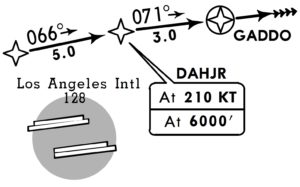 While mentioned before, the arrival phase and ATC Altitude Clearance procedures really presented the change to status quo and a few challenges. Prior to this, a typical STAR and Descent clearance into pretty much any airport in the world left no doubt as to what altitude you were descending to. Now with the introduction of “Descend Via the (XXX) Arrival” and the regular interjection of “Except Maintain … ” – we’re now looking at the chart to find out what the eventual stop altitude is (6000 ft for the RYDER) as well as what the next restriction was on the chart, and how to remember a clearance altitude we can’t set into the MCP Altitude Selector.

I’ve spoken to crew who operate into LAX regulary who review the FAQ each time – I can certainly understand why and suggest this is a pretty good defence measure against this (relatively) new and potentially confusing phraseology and it’s implications.

But moving on the STAR specifically …

What remains below are small treatises on the three issues that have come up for discussion as a result of these procedures. I believe what is written below is firmly rooted in Boeing Documentation and Boeing Philosophy – your view may vary … In the end changes, published procedures, and ATC actions increase our workload and make our job of maintaining a safe flight environment just that little bit harder- but hey, if you can’t take a joke, you shouldn’t be playing the game, should you? 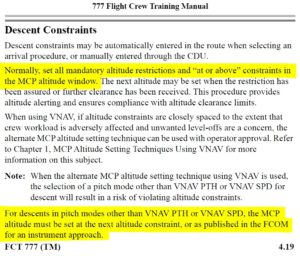 The Boeing FCTM seems clear on this point – as an over-arching principle, we should set all altitude constraints to ensure awareness and compliance. For sure when you’re not in VNAV – you must set them all, including (by implicaton) the At-Or-Below’s. But FCTM 4.19 specifies in particular [“Restrictions” or “At or Above” constraints] and (I believe) intentionally leaves out At-Or-Below’s. I believe this means we can leave them out (in VNAV), and that seems to be common practice anywhere I’ve operated. But I suggest you consider this (sort of) a normalised deviation, and brief that sucker.

While setting the At-Or-Below’s may increase situational awareness, it achieves nothing practical in terms of protecting compliance with the restriction and in fact increases the likelihood of an unwanted VNAV ALT capture during the descent.

So – if we don’t set them, what’s the risk? The risk is we don’t make the restriction and because it’s not on the MCP Altitude Selector and on PFD in front of us – we forget to monitor. The protection available at this point falls into the Climb and Descent scenarios:

As always – if you have a restriction in the FMC between you and your MCP Altitude Selector, a single press of the selector will clear that restriction – and this includes the At-Or-Below altitudes you aren’t setting. This is the REAL risk of not setting at-or-below’s and why every single un-necessary press of the altitude selector in the aircraft (or simulator) is subject to a one beer penalty after the flight. 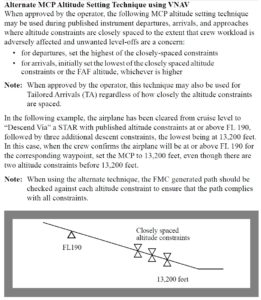 It must be clearly stated at the outset that this is not a technique that supports setting the End-Of-STAR altitude when initially cleared for Descent via the Arrival as has been suggested in some quarters. There is, in fact, no justification for such a non-standard, anti-Boeing philosophy technique anywhere in the FCTM, except perhaps for Tailored Arrivals (TA) – which these procedures are not.

For sections of a STAR where the waypoints and altitude constraints are closely spaced, the Alternate MCP Altitude Setting technique is a possibility, and in such cases the PF typically sets the lowest constraint, while emphasising the hell out of the fact that intervening MCP altitude protection is not available, and that a single inopportune press of the MCP Altitude Selector will delete the next FMC altitude protection, without confirmation and possibly without notification to the pilot. For this reason (and others) Boeing specifies that an operator must provide specific training to crew on this technique, including:

Until your training organisation has provided this training, and promulgated the procedures to which it applies, the Alternate MCP Altitude Setting technique should not be employed. Note that any training you may have received on not setting altitude during an NPA is unlikely to extend to the use of this technique during SIDs and STARs – but your mileage may vary.

Cleared to an Altitude NOT set in the MCP Altitude Selector

Quite typical with these procedures, is a separate requirement to finally meet an altitude requirement that is either at the end of the SID/STAR – or required by ATC in addition to those promulgated in the chart. Typically this consists of clearances such as … 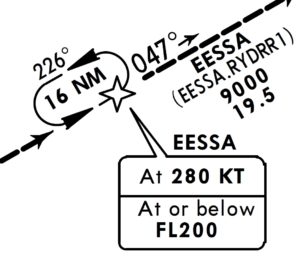 It can be seen that for most of this descent, we’ll be on our way down to a clearance altitude that will not be set up in front of us in the MCP Altitude Selector and on the PFD. Even now, this is pretty unusual and a clear human factors trap. This altitude HAS to go somewhere once it’s given/determined. Many pilots write it down. Our SOPs require one of the relief crew to document all such clearances on the flight plan. Some Pilots Monitoring (PMs) place the altitude in the Scratch Pad of the FMC or into the Fix page.

In short – all of these methods are acceptable – PICK ONE and BRIEF IT. Always ensure that a cleared altitude you can’t set in the MCP Altitude Selector is available for reference until it can be set. And if your airline operates regularly in this environment, your Training/Standards department should give consideration to formalising the recommended technique for dealing with this issue.

Imagine you are on descent in VNAV PTH, MCP Speed Window closed (280 kts from the FMC), tracking towards a waypoint where there’s an At-Or-Above restricion (say 12000A), with the MCP Altitude Selector set to a lower altitude (say 9,000). ATC tell you to increase speed to 310 kts. You speed intervene (now you’re in VNAV SPD) and you go below the path. If you get to 12,000 before the waypoint/restriction – SPD … VNAV PTH will engage, with the speed window remaining open, and the aircraft will level off at 12,000 ft. Once you meet the waypoint/restriction (or if it’s cleared), depending on where you are in relation to the path – IDLE/HOLD and VNAV SPD will re-engage (MCP Speed Window stays open) and the descent continuues.

As previously discussed – there is no descent path protection/alerting in respect of meeting an At-Or-Below constraint when in VNAV SPD. If you’re not in VNAV PTH, you’re not playing the game and you’re the one responsible for flightpath management. Weren’t you always?

In VNAV PTH, the aircraft accelerates if necessary to maintain the calculated/required path. But the speed can only be increased just so far, and at some point the AFDS will revert to VNAV SPD and give up on trying to make the requirement. Prior to this point – expect to see DRAG REQUIRED – indicating your input is need to correct the situation. The speeds involved comes in a couple of flavours: