So, Who should Fly?

Currently I’m evaluating research on the roles of the Captain vs the First Officer in the detection and correction of procedural errors on the flight deck. Fortunately I’m not looking at our entire operation, just one small corner of it. 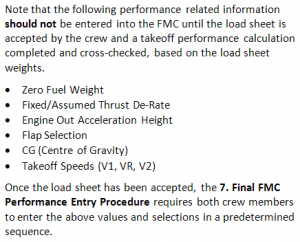 Our SOP’s are pretty much based on Boeing’s for the 777. Initially the FMC is (almost) completely programmed by the First Officer while the Captain does the walk around outside during the pre-flight phase. I say almost, because the crucial takeoff performance figures are left out deliberately at this stage.

The Captain will verify the FMC entries made by the First Officer against the flight plan and other sources once back on the flight deck. Once again critical Aircraft Weight, Take off Thrust / Configuration / Speed and other take off related performance information is left blank.

There are good reasons behind delayed entry of this data. The first is the changing nature of this information during pre-flight – between initial data entry and pushing back for departure a number of the variables upon which performance information is based can and does change. Aircraft weight, departure runway, airport weather, configuration – and several more – are all subject to change. If the FMC were completed initially, each change on one of the variables would require an update to the FMC.

There is also the likelihood that a single change in a variable can produce several settings changes in the FMC. All this multiplies and complicates the process of achieving accurate, cross checked performance information into the FMC.

Thus we wait until we have the final weight of the aircraft known and updated airfield weather data available. Then if necessary a re-calculation of takeoff performance data is done and the final figures entered into the FMC shortly before pushback.

The cross check for the initial FMC setup is one pilot entering information into the FMC; later on a second pilot independently verifies the data entered. 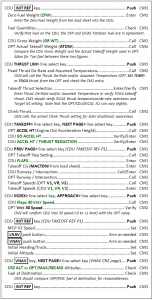 Once the load sheet is received and a final run of laptop calculated take off performance is done – the Final FMC Performance Entry Procedure results in (hopefully) the accurate entry and cross check of the required data. The importance of the accurate calculation and entry of this information cannot be over emphasised.

While the procedure certainly looks complicated (as shown here on the right), a lot of the complexity here comes from the detailed scripting of who does what in terms of the source of the information and who has it; the entry of information and who does it; and the cross checking. In practice it’s a lot easier than it reads.

This procedure is learned and practised on the ground using a computer training aid and then a flight simulator until it becomes fluid from recall. A competent crew with procedural repoire aren’t at all challenged by the correct completion of this procedure – omissions and errors stand out clearly to an observer familiar with the flow it.

Reading through the procedure the roles of the two pilots involved are clear.

This is where the current issue comes in … Who should be doing What?

The cross check here is two pilots working together using a tightly defined, scripted procedure to enter data across several pages of the FMC. Omissions by one pilot should be picked up by the other. Though it ties up both pilots at once and is subject to an elevated risk due any interruptions; this procedure is considered industry best practice.

There has been a number of research projects, based on data collected from airline flight operations, examining the rates of error production – and more importantly the rate of error detection – when comparing a procedure done by the Captain and monitored by the First Officer, versus reversed roles. Our procedures (above) are clearly designed based on the Captain – being the more experienced and therefore more likely to correctly action a procedure – as the protagonist in our script physically entering the data.

However there is data now (actually it’s been around for a while) to suggest that while an increased error rate may occur if the junior less experienced crew member is performing a procedure, the error capture rate (as enforced by the Captain) is significantly higher, achieving an overall better result.

As such, the procedure I was taught and have been using for 15 years; the procedure we’re now passing on, would seem to be ass-about. The First Officer should be entering critical performance data while the Captain provides, monitors/cross checks.

Let’s look at some of the documentation.

The impetus of this report was the Emirates A340 Tail Strike incident in Melbourne, March 2009 – an investigation which interestingly is still ongoing. While prompted by this incident, AR2009/52 doesn’t dwell on the Emirates event in Melbourne, instead selectively reviewing related incidents from Australia and Overseas.

For the most part our procedures are highly compliant with the observations and recommendations of this report. That said, I did see 9 ways in which we could improve safety with respect to our operation – inside and outside the flight deck – and provided the summary to Flight Operations Management.

In particular, this table from AR2009/052 caught my eye. It took a while, but I was able to track down one of the authors, Dr Matthew Thomas and obtain his report and some additional data. I’m still working through this in detail at the moment as I formulate a report for our Standards Committee to look at altering our procedure.

Behind the data and the statistics is essentially the axiom that while a First Officer may make more mistakes (statistically) than a Captain; a Captain is much better at detecting – and correcting – the mistakes of the other pilot that a First Officer is.

From my personal perspective, I’ve been training and checking pilots here since pretty much the first pilot arrived 8 months before our first aircraft did. During training and occasionally during checking, this specific procedure has at times not been without error and as such the cause of a number of debriefing discussions. In essence I’ve been watching Captains making mistakes in the data entry/checking of this procedure on and off for two years now – albeit usually minor, low/no direct impact mistakes.

During the subsequent debrief discussion, the procedural error would be clarified – but also discussed was the lack of cross check from the First Officer. Only rarely do I encounter a lack of procedural knowledge on the part of the FO – just a hesitancy to correct the Captain over what was perceived as a relatively minor procedural error – particularly in the check/training environment. This is classic flight deck authority gradient stuff.

If you think about it – both our Captain and First Officer are trained (at least in terms of the aircraft/operation itself) to a pretty similar standard; in our airline both hold a command aircraft type endorsement/command instrument rating on the aircraft; both are trained initially and recurrently according to the same lesson content. From the training point of view, there’s no reason to expect that our First Officers make more mistakes than our Captains. Add on top of this the fact that as a new start airline – most of our First Officers came to this airline with significant experience levels; the competency gradient between the Left and Right hand seat is pretty flat at times.

In addition to the style adopted by the Captain, the interaction between the flight-deck members will define the authority gradient between the two. A steep gradient results in ineffective monitoring from the co-pilot, and a flat one reduces the Captains’ authority by constant (unnecessary) challenge. The optimum gradient, which may differ between individuals and national cultures, encourages an open atmosphere to monitor and challenge, while respecting the Captain’s legal authority. Most airlines encourage a flat cockpit authority gradient, since there are a number of nationalities, levels of experience and different cultural backgrounds in the pilot group. Nevertheless the duties and responsibilities of the pilot-in-command should in no way be affected by a shallow authority gradient.

Based on this fairly equivalent capability (at least in terms of aircraft knowledge and procedural familiarity) one would think that the CRM concept of Authority Gradient would be pretty flat in our airline as well. But in terms of this procedure – it would appear this is not the case.

Any proposed change to SOPs undergoes a review of a fleet management committee to evaluate the need for and impact of the change. A change like this however is going to be something else again. I all likelihood we’ll involve personnel from the Flight Safety Department to evaluate the risks and benefits of the procedural change. Assuming the benefits are considered worth the risks, then the risks need to be managed – including managing the risks of the change process itself.

The concept of the First Officer flying with the Captain monitoring as a safety paradigm is not new. While it’s application to an operation as a whole is unlikely to find favour – I’m hoping it’s application to this little corner of our SOPs will improve the safety of our operation.

« Perses, thy name is Ken … Will the REAL Ken Pascoe … stop stealing my mail. »