Next time you reach up for something on the Mode Control Panel (MCP) – try and remember that 50,000 volts could be involved … Let me explain.

For some time we’ve been operating under the restriction of a service bulletin from Boeing in respect of the use of the “Auto/1000” selector on our Mode Control Panel (MCP).

For those not in the know – service bulletins come to airlines from the manufacturer when something about the aircraft is discovered – more often that not by the pilots flying the aircraft – that doesn’t quite meet with the design intent, or the expectations of the Pilots, the Airline, the Manufacturer … or the Regulator. An analysis is done based on feedback and occasionally the pertinent aspects are communicated to all operators of this aircraft type (and/or types similarly affected by the event) through service bulletins. Currently we are carrying 15 service bulletins on our aircraft.

These can be software anomalies in one of the computers, or in other systems on board, changes to operating techniques of procedures, in short a service bulletin can impact any area of the wide sphere of airliner operations. 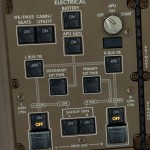 – Some aircraft are experiencing both engine electrical generator off lights illuminated after engine start when the generators should be online – and no associated ELEC GEN OFF advisory message is displayed on the Crew Alerting System (EICAS). Pilots are required to check for this after engine start. The generator manufacturer is examining the problem (… since approximately 15 December 2013 …)

– Some aircraft have reported a nuisance SMOKE BBAND UPR DR2 message, This message is associated with a piece of equipment not installed on the aircraft and will be corrected with the next major Aircraft Information Management System (AIMS) update in mid 2015.

– Engine Anti Ice valves have been reported as sticking – this was eventually traced down to small debris in the valve. Crew are advised to cycle the valve up to 5 times. If this fails to correct the problem, icing conditions should be avoided. The problem will be corrected with software update (no idea how!).

You get the idea … Despite what I’ve written here, many of the bulletins can be directly relevant to your operation of the aircraft today.

But for the most part … not.

Anyway so we’ve been carrying this bulletin around for a while called “Control Panel (MCP) Altitude Window Changing Without Pilot Action“.

Basically a Japanese Boeing aircraft operator had several instances where the altitude window on the MCP would “jump” around without the pilots intending the change. While initially skeptical – Boeing examined the issue and found it verified, then started what turned out to be a fairly involved process that wound up including the manufacturer of the MCP.

As it turns out – the prevailing opinion is that the problem is caused by a static discharge from the Pilot into the MCP – of the region of 30,000 to 50,000 volts. Not kidding. If there was ever a reason for decent cotton uniform pants instead of those synthetic nasties they usually give us – this must be it.

Recently we received a visit from a Boeing Technical Pilot. I asked him (what I thought) was a fairly reasonable question, along the lines of “Bill, when can we go back to using the MCP Altitude Selector the way it’s supposed to be used – keeping it in Auto is a pain in the ass.” He responded by showing us an eye-popping video of the selector jumping as it was zapped with 30K+ volts in a lab. Not any time soon, apparently.

I did some Googling and as it turns out, while 50,000 volts is a little excessive – 30,000 volts is very achievable in the environment we work in. Very dry air, constantly sitting in our polyester pants and moving around on (my wife laughs at this) – a Lamb’s Wool. So apparently 50K volts is not that unrealistic – although I don’t want to know how much wriggling around on the lambs wool you have to do to achieve it.

Actually keeping the damn thing in Auto is annoying – it’s a lot of whizzing from 5000 to 35,000 ft. But we’re keeping it in Auto so that any Zapping-Inspired-Selector-Changing error will be in the 100’s of feet Altitude, rather than 1000’s.

This issue has been verified to affect any of the selectors on the MCP, all of which pretty much operate the same way. This includes airspeed, heading, vertical speed … therefore maintaining situational awareness of your automation, monitoring changes made on the MCP via the PFD/FMA (“Read The Glass“) should be axiomatic – if it wasn’t already so before.

« Flightpath and Automation Management Workshop Danger and the Mind of Pilots »