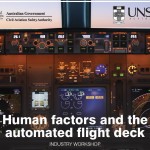 Recently I attended Day One of an industry workshop sponsored by CASA and the University of NSW on “Human Factors and the Automated Flight Deck.”

Day One consisted of a series of highly qualified and experienced speakers across a range of regulatory based automation management subjects, and Day Two we moved into a series of workshops on specific areas with guided discussions.

Quite apart from the content, the opportunity to meet and mix with a cross section of airline representatives from most aspects of the Australian airline and regulatory environment is fascinating and unique for a line driver. It’s only when you have this opportunity that you really see how small aviation – particularly Australian aviation – really is, with familiar faces going back 5, 10, 20 … 30 years.

Owing to the nature of the content, this post won’t go into the details of what I learned over these days – but I’ll provide links for further reading and post some of the aspects of what I saw that struck me the most.

The primary focus of the presentations and workshops was?the 2013 release of the work of 4-6 years of the?FAA CAST (Commercial Airline Safety Team) and PARC (Performance Based Aviation Rule-making Committee) teams who jointly formed the Flight Deck Automation Working Group (FDAWG) to review accident data and produce the “Operational Use of Flight Path Management Systems” published in September 2013.

This team of dedicated professionals – some of whom were present today – were in part updating the work of a decade before on “The Interfaces between Flightcrews and Modern Flight Deck Systems” – the seminal 1996 document which identified key features of automation and flight path management safety issues after in the move to FMS, EFIS, Electronic Warning and Checklist Systems of the 80’s and 90’s. The introduction of technology into aviation has at times been a case of two (or more) steps forward with the odd step back – the original 1996 report reviewed years of data (including accident/incident statistics and investigations) associated with the introduction of advanced technologies into the flight deck, identified a number of shortcomings in system design, flight crew training and flight deck procedures, focussing on industry and regulatory solutions. Both the 1996 and 2013 reports are well worth a read if you operate glass flight deck aircraft, particularly if you are looking for a more in depth understanding. 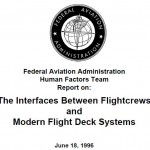 Dr Abbott reviewed the background behind the report, including the genesis in the 1996 document, and the focus of the group across the various data sources used to collate meaningful conclusions and recommendations which included ASR’s, Accident/Incident reports and LOSA data. One aspect touched on was areas identified in the 1996 report that had changed/improved, or had still remained an area of concern today.

I noted the following points from Dr. Abbotts remarks. Note many of these remarks are based around specific findings of the report – I encourage you to read these directly,

On the back of Dr. Abbotts review, I look forward to working through the report in more detail over the coming weeks, particularly in light of the workshops tomorrow.

Captain McKenny reviewed the need for an adaptive and comprehensive policy on flight path management in airline documentation. Of particular focus was the point that perhaps too much focus has been placed on the automation itself – rather than on the need to monitor, predict and control aircraft flight path through the various appropriate levels of automation available. Essentially the Tools have been the focus, rather than the Task. Policies need to stress that the responsibility for flight path management remains with the pilot.

Meanwhile policies should identify opportunities for manual flight. Automation must be recognised as a tool – and distinguish between modes of Guidance vs Control. Separating out the two facilitates transitioning between the various levels of automation.

Useful guidance can and should be provided on when pilots should say to ATC “Unable.”

Information Automation – EFB, FMS, etc – how to use them without them becoming a distraction in the management of flight path. 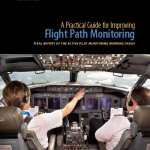 The roles of the PF and PM and their dual responsibilities in both flight path monitoring and flight path control could be better defined and should be included in policy documentation and guidance.

Flight Safety Foundation recently published a document on Pilot Monitoring. A review of how we define, document, train and check pilot monitoring is long overdue.

The issues of Manual Flight and the maintenance of the skills – both cognitive and manipulative – receives special focus in the report and by these excellent presenters. As a long haul pilot, where 50% of my flights are conducted from the jump seat on the aircraft in the role of a checker – this is a particular interest for me as well. The following were noted as areas of concern.

Simon spoke at length on this area and provide much food for thought with a very practical approach to the implementation of the report.

Primarily the seminars are focussed on the results of 4-6 years of hard work by a team of dedicated professionals on ?This document updates the work done over “. The 1996 document was the seminal work based on observations that while progress in flight technologies (FMS, EFIS, Warning Systems and the like) had introduced higher levels of safety and efficiency in the flight deck – it had also been found to be a contributory factor in a number of high profile accidents. ?as follows (Note – This is a very short and subjective summary – I recommend reviewing the first few pages of the 1996 report itself …)

Interestingly the report stressed the need for slow, carefully implemented change, and in a manner to avoid detracting from existing safety practices. How nice is that to read? Thirty six recommendations across XX key subject areas were documented, summarised as follows, commencing with the imperative to invest in People (designers, users, evaluators and researchers) – including a refocussing of flightcrew training investment towards automation issues.

« Missed Approach Acceleration at ALT Capture 50,000 volts into the MCP »