By far the most common error we see in the simulator in regard to the flows is forgetting to select the CHKL button at the appropriate time to display the next ECL normal checklist; closely followed by innapropriately displaying the checklist early. 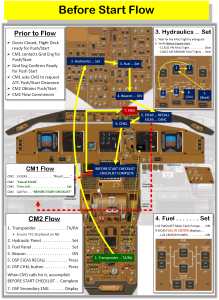 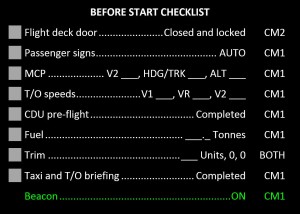 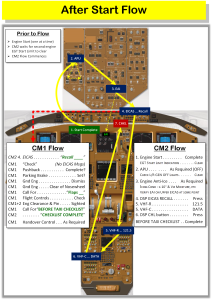 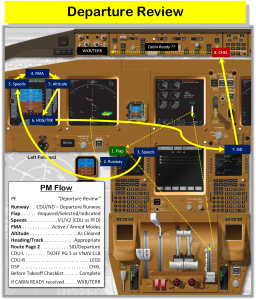 Once clear of congested areas and when workload is low, the PF will call for a Departure Review. This review of EFIS and other settings for the departure is conducted by the PM, and monitored by the PF during taxi. It completes with the display of the Before Takeoff Checklist (CHKL). WXR/TERR is only activated once CABIN READY has been received. 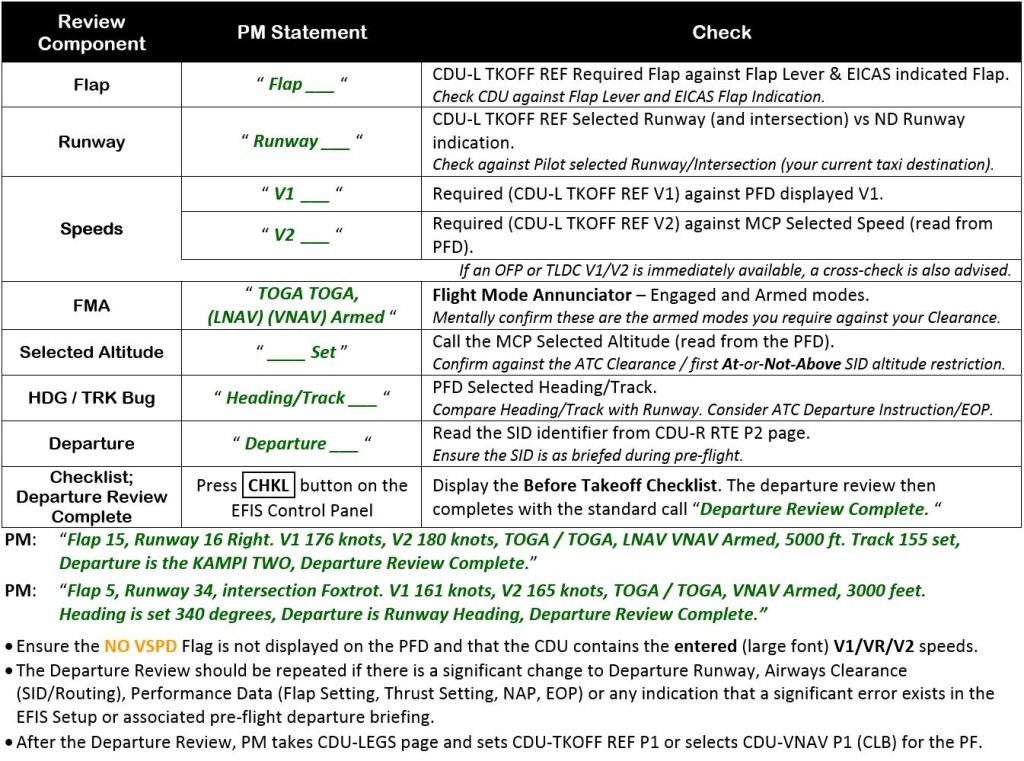 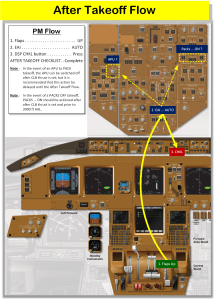 The After Takeoff Flow is commenced once the Flaps are selected UP. The PM should ensure that the flight stage is appropriate – low workload, low distraction environment. The Flow and the subsequent After Takeoff Checklist can wait until immediate terrain and weather clearance is assured, ATC is quiet, traffic is light and the immediate demands of the SID (tracking, speed, altitude) are met.

The After Takeoff Checklist is displayed by the PM once the Flaps are selected Up as part of the After Takeoff flow. PF calls for the checklist once the workload is low and the aircraft clear of terrain on departure. PF can use the removal of the Pitch Limit Indicators (PLI) from the PFD as a tip to call for the After Takeoff checklist – although at high weights at UP speed the PLIs may not be removed straight after flap retraction is complete because of proximity to the manoeuvre margin. 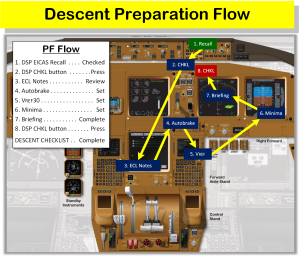 Descent preparation is typically conduct by the PF who may hand over control to complete the setup. As a guide, preparation consists of some or all of the following actions/considerations, in any order determined to be suitable. 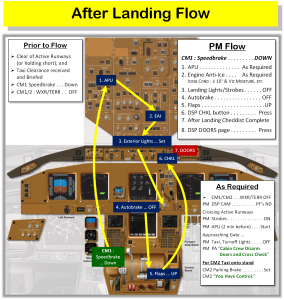 The After Landing Flow is actioned once the aircraft has reached Taxi speed, cleared all active runways, and the crew have received, briefed and understood the subsequent Taxi Clearance from ATC. The flow is actioned by the CM1 stowing the Speedbrake Lever – CM1 should not take this action until the aforementioned have been done. Should the aircraft be required to hold between two active runways – the speedbrake lever can be stowed and the flow completed while waiting. The flow completes (as they all do) with the EFIS CHKL switch to display the After Landing Checklist on the ECL 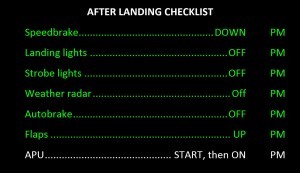 The After Landing Checklist is displayed as the last item in the After Landing flow. The trigger to commence the flow is CM1 stowing the Speedbrake Lever after landing – irrespective of which pilot is PF 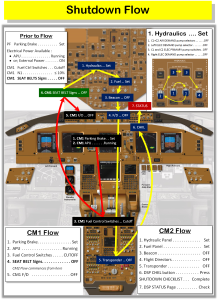 The CM2 Shutdown Flow commences once the N1s have reduce to 10% and CM1 switches the SEATBELT Signs … OFF.

The Shutdown Checklist is displayed as the last item in the Shutdown flow. 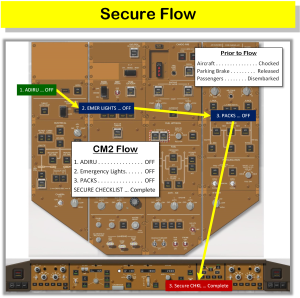 The Secure Flow is actioned once all passengers have left the aircraft. However if you’re handing over to the next crew these actions may not be required.

The Secure Checklist is commenced once all passengers have left the aircraft, and is to be completed anytime a handover to the next operating crew is not possible.

« Engine Out Drift Down – and the FMA Standing the Crew Up »