Engine Out Drift Down – and the FMA

I’m working on an update to the Practices and Techniques document I developed in 2008. While this has been a published document in my airline for several years, it was recently taken offline and is now a training background reference, as was the original intention for it’s development. Something that’s been missing for a while is some content on one of the bread and butter check/training events for cruise pilots – engine failure at altitude and the subsequent drift down descent. 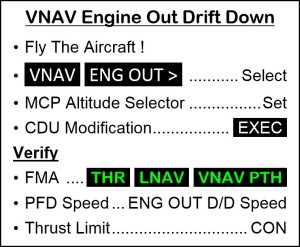 The basic steps to initiate a VNAV engine out drift down are covered during transition and reviewed in line training. However the following aspects deserve further attention based on observations from recurrent training/checking.

Pause to ensure you Fly The Aircraft.

This means positively ensuring pitch attitude, lateral control and thrust. If the TAC has failed rudder input is required although trimming can be delayed if necessary. Ensure the Auto Throttle is advancing thrust on the good engine. At altitude, the selection of CON is unlikely to provide any increase in thrust over the default CLB setting – but it may give you a feeling of accomplishment

Note that verbalising at least some of this as you do it may feel odd – but it makes the assessment task much easier for your instructor/examiner, which after is why you are there, isn’t it?.
Commencing the Drift Down. 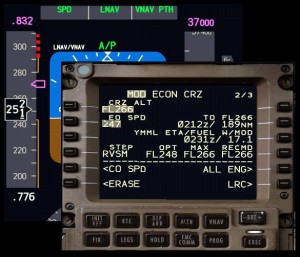 The requirement to move straight into the drift down is usually driven by Airspeed, specifically how long until you’re at the minimum manoeuvre speed. The higher above the engine out maximum altitude the aircraft is, the faster the speed will decay. Drift down is initiated through the CDU by selecting the VNAV ENG OUT> line select key. Once selected – it’s not a bad technique for the PM to call the modification to get confirmation of execution … “VNAV Engine Out – Altitude FL266, Speed 247 … Confirm?”

The CDU highlights the proposed modifications including an altitude change (if the ENG OUT maximum altitude is below current aircraft altitude), and the recommended engine out descent/cruise speed. Either the recommended altitude (or lower – next quadrantile?) altitude is set in the MCP Altitude Selector.

At this point the FMC modification can be (confirmed and) EXECuted.

Its now crucial that the PF verifies the following:

Calling and verifying the FMC change is crucial. One of the more common errors observed in the simulator is attempting to commence the drift down while not in VNAV PTH – such as ALT or VNAV ALT. In this case the FMA won’t change, the descent won’t commence and the speed will decay into the manoeuvre margin, usually as the crew are distracted commencing the NNM checklist.

Somwhere in all this will come the requirement to verify the failure, and commence the appropriate Memory Items / Checklist. But the drift down (implied as part of “Fly The Aircraft”) usually comes first.

Engine failure at altitude is traditionally conducted in straight and level flight. Thus the FMA mode changes are from:

However the introduction of an engine failure while the aircraft is either step climbing or step descending at altitude introduces a new twist. The first complication tends to be – particularly during a step climb – the PF selecting altitude hold to level off from the climb. In and of itself, this is not a bad reaction, but it establishes the aircraft in an FMA mode from which it will not automatically (as expected, trained) commence a drift down descent. As long as the PF is aware of this, VNAV can be engaged once the MCP altitude selector is set and the ENG OUT drift down mode executed, and the AFDS will establish the drift down as expected.

Initiating a Drift Down during a Step Climb

With the aircraft in VNAV SPD , one would assume that VNAV will continue to guard speed in the event of an engine failure during the climb, continue to maintain CLB thrust, and the aircraft would basically commence a drift down descent, albeit at cruise speed. In fact while in VNAV SPD but with a higher altitude set in the MCP altitude selector, VNAV levels the aircraft out (owing to a lack of thrust), but allows the speed to decay while maintaining level flight. In effect – VNAV will not commence a descent from a climb (MCP Altitude Selector set above current altitude) in order to protect speed. However once the MCP altitude is reset and the CDU VNAV ENG OUT> modification executed, a correct engine out drift down is established.

Initiating a Drift Down during a Step Descent

With the aircraft in VNAV SPD , the aircraft is likely to be established in an idle (or above idle) thrust descent. A non-idle thrust descent occurs because the step down altitude change was relatively small. With the loss of thrust of an engine failure, the descent rate will increase. Further, with the change in altitude selector to the engine out maximum altitude (but prior to the modification execution), thrust on the operative engine will reduce to increase the descent rate to the new target altitude. However with the execution of the CDU VNAV ENG OUT> modification, a drift down descent is established. Speed protection is provided throughout.

In short – try and have your engine failures at altitude while on descent.