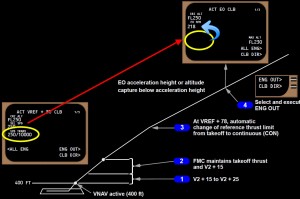 A not-so recent amendment to the B777 FCTM (followed by a more recent update to the FCOM and QRH) instigated a procedure where ENG OUT mode of the FMC VNAV page is selected (confirmed) and EXECuted once CONtinuous thrust has been set after takeoff. While this sounds logical and orderly – as usual the devil is in the details and the specifics of actioning this needs to be understood and considered by the PF/PM should they find themselves in this situation.

Specifically – executing ENG OUT at this point in time of the departure removes the VNAV climb page speed/altitude restrictions. Typically this means the loss of 250/10000 on most initial climbs – but also any other coded or entered VNAV Climb Page speed/altitude restrictions. At our typical operating weights (in excess of 320 tons) this usually means an ENG OUT climb speed of about 285 knots.

Interestingly, any LEGS page restrictions on climb speed remains in spite going to ENG OUT mode.

Is there really anything wrong with this? You could safely assume that in the event of a non normal such as an engine failure (whether MAYDAY or PAN PAN PAN) , you’re no longer subject to the 250/10K restriction. And you’d probably be right. But it’s best keeping everyone in the picture and asking/advising ATC before doing so.

Perhaps the biggest alarm bell that goes off for me when I see this is that when the aircraft accelerates after the execute – it takes the crew by surprise. Since this procedure is new and therefore most crew haven’t seen it done – they’ve never seen the removal of this restriction before either, so should I be surprised?

Except that they have seen it. Immediately between the “VNAV Engine Out … Confirm?” from the PM and the PF’s “Execute“, the FMC VNAV Climb page shows you the future – Maximum Altitude with Engine Out; Cruise Altitude, reset as required for single engine service ceiling; Engine Out Climb Speed … and no 250/10,000 speed restriction. But no-one spots it. The PM doesn’t call it; the PF doesn’t see it during the (peremptory) cross check required before the “Execute“. I agree that it’s easier to see things that appear and things that are marked inverse because they’ve changed; but our job description is not to only notice the obvious when making FMC changes.

What should you do in this situation? If your SA is high, you’ll notice the change in target speed, the control column input as a nose down input is applied, and the change in pitch attitude on the PFD. Assuming you weren’t aware of the coming change, I would expect you to speed intervene and maintain current airspeed, whether UP speed or 250 knots. The next time round, the solution would be to speed intervene before executing ENG OUT. Anything else is too fiddly with the CDU while at a high workload period of flight.

All of this tells me we still have a way to go before we reach a gold standard of understanding what the FMC is telling us during these Confirm … Execute exchanges; and that VNAV is still (at times) damn confusing. Well, that last part I definitely knew.