Recently I was given a runway change on pushback. Despite operating out of LAX where runway change is a real likelihood, it’s been quite a while since I’ve had happen to me on taxi. Once we got the changes made –  we ran the ECL Runway Change Checklist to tidy things up. Meanwhile our next refresher phase is bringing the runway change on approach event back into the sim. So, I thought it was time to revisit my PowerPoint on Runway Change.

The Procedures and Techniques document has several sections relating to Runway Change: 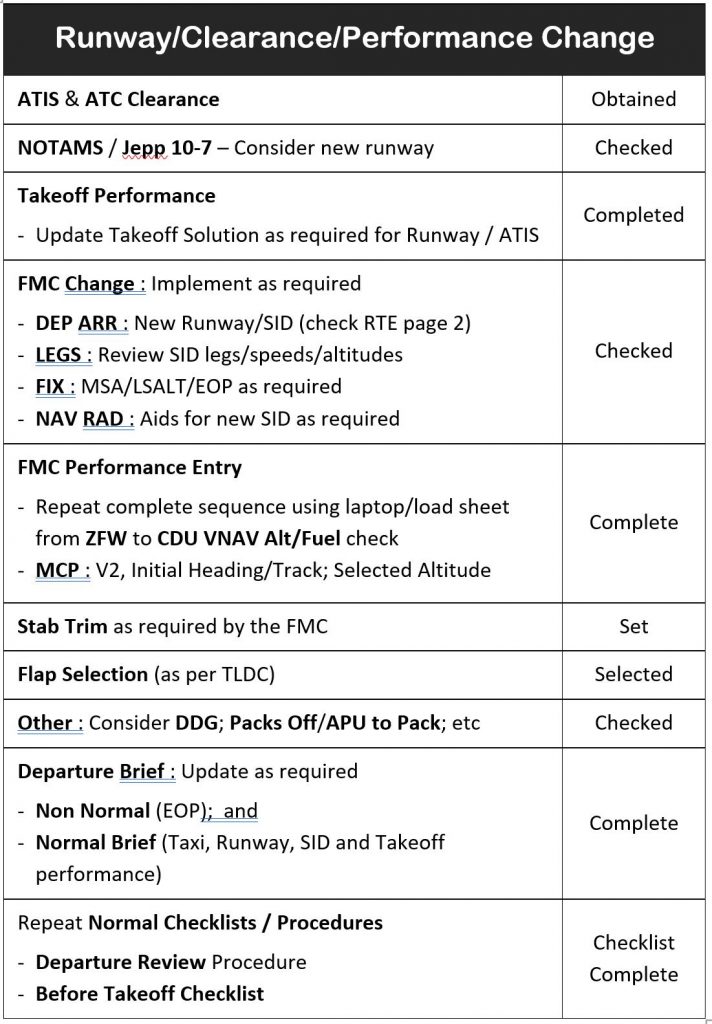 A crew make dozens of entries, selections and decisions during pre-flight that are tied to a specific runway and the departure direction associated. In addition, a complex mental model which includes terrain, weather, NOTAMS, procedural implications and more is established by briefing and other thought developing processes. All of these are typically accomplished through practised, familiar processes that happen in sequence and are the result of learned, practised behaviours.

While most of these changes are mechanical in nature and can be the result of a checklist – such as the Runway Change Procedure shown here – more complex is the development of a pilot’s mental model of the taxi, takeoff and flight departure. This can generally only be achieved – particularly across the flight deck – by repeating/updating the Departure Briefing once the changes have been determined, evaluated and implemented in the flight deck.

Often the first indication of a previously unknown runway change is the direction of pushback in the push/start clearance. In this case the most appropriate response is usually to cancel push/start, remain on stand and action the change. While this can result in a departure delay, it results in a better change action with less time pressure on the crew to accomplish what needs to be done.

The Final FMC Performance Entry procedure must be actioned in full no matter how small the changes involved in takeoff performance – from ZFW verification through to MCP and VNAV Climb Page Altitude/Fuel Checks. Once the Departure Briefing is updated the Departure Review and Before Takeoff Checklist must be completed (or repeated if necessary). 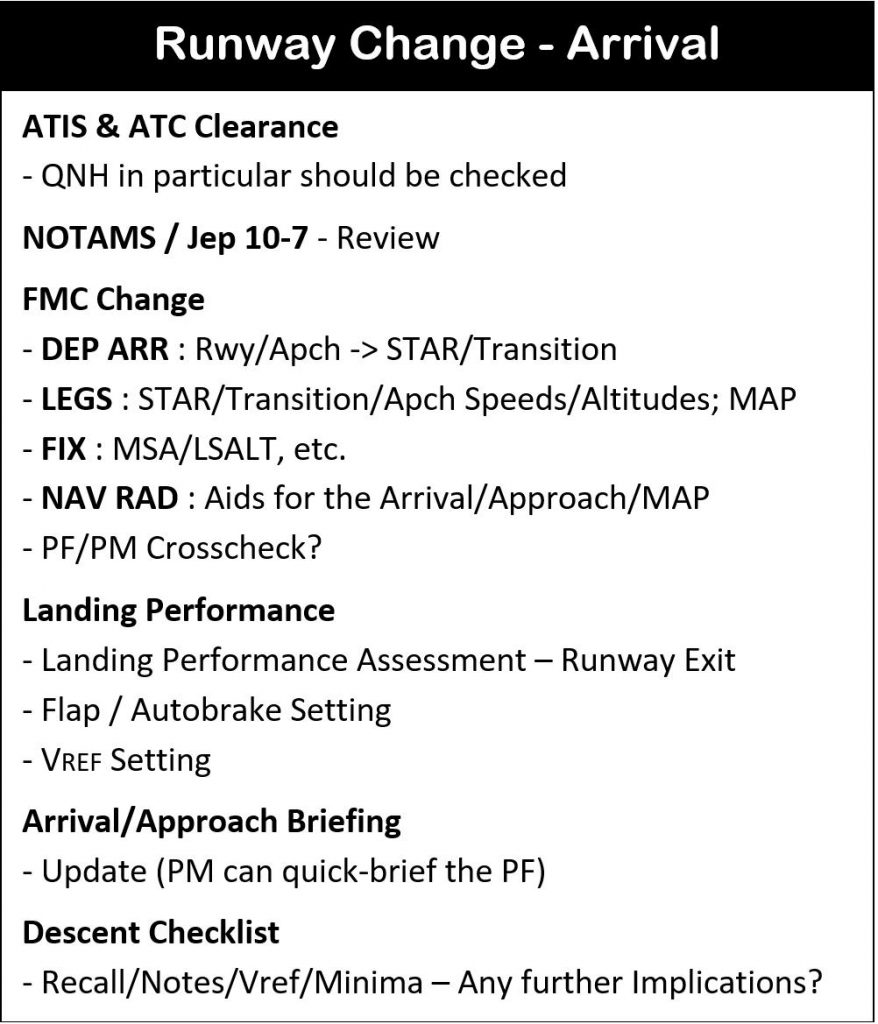 Much like Runway Change on Departure – changing your runway(Instrument Approach, and possibly STAR/Transition) during the descent after all your carefully planned, setup and briefed actions, based on what now turns out to be the wrong runway – can be a High Risk Event that brings with it significant Threat and opportunity for Error.

As before – a quick reference guide like the one shown here can be used as a mitigator against this thing going pear shaped – but is not a replacement for Airmanship and careful, thoughtful execution.

Unlike cruise – the descent environment is one where the Pilot Flying needs to fully focus on flying the aircraft and controlling flight path; even as the Pilot Monitoring becomes totally distracted by the requirement to consider and establish the changes required.

This is one of the few times where out flight tends necessarily towards a single pilot operation – I’m not endorsing this aspect; I’m just saying that this is what happens. So – recognise the threat and deal with it accordingly. During this time if the aircraft suffers flight path changes from ATC; or changes are require to comply with procedural restrictions – the PM should stop and return fully to the Pilot Monitoring role, before getting back on with setting up for the new runway.

Handing over so the PF can do the setup remains an option but handing the aircraft back and forth come with it’s own risks. Maintaining the mental model of situational awareness that is arrival/descent is something both pilots should be doing – but by it’s nature it tends to be something the PF is able to hang onto best if he/she remains the PF.

The Descent Checklist is an interesting one. Anytime you suffer a runway/approach change – or in fact if you divert to your alternate – the Descent checklist should be either re-run or at least it’s requirements considered in the procedural handling of the change.

In the context of a runway change, Route 2 allows you to pre-build an alternative STAR/Transition/Approach and Missed Approach – to be activated when a runway change becomes evident. When activating Route 2 – you’ll need Activate Route 2; find the next waypoint relevant to your revised clearance, go direct to that waypoint and “Confirm … Execute”. Both pilot should give the new active route a check/crosscheck even if they validated Route 2 during Arrival preparations.

Side Step minima and manoeuvres are in place to maximise traffic throughput in the event of an ILS failure on the landing (outer) runways at KLAX. For example, in the event of a localiser failure on RW25L, pilots might expect to be cleared for the ILS Approach for RW25R, with a sidestep to RW25L. Departures will continue off RW25R during this procedure.

Note that at KLAX all ILS’s radiate irrespective of the nominal “Landing” runway, unless ATIS/NOTAM’d otherwise.

The procedurally correct missed approach off a side step is that associated with the approach flown for the non-landing runway. However, KLAX ATC will always issue a specific heading/altitude for a missed approach of any approach into KLAX – see Missed Approach Procedure – KLAX.

Consideration should be given in the event of a Runway / Approach / Airport change to re-running the Descent and Approach checklists if the change occurs after they were completed. Not always necessary, not always practical – but worth a thought.

Approach to a Side Step Landing 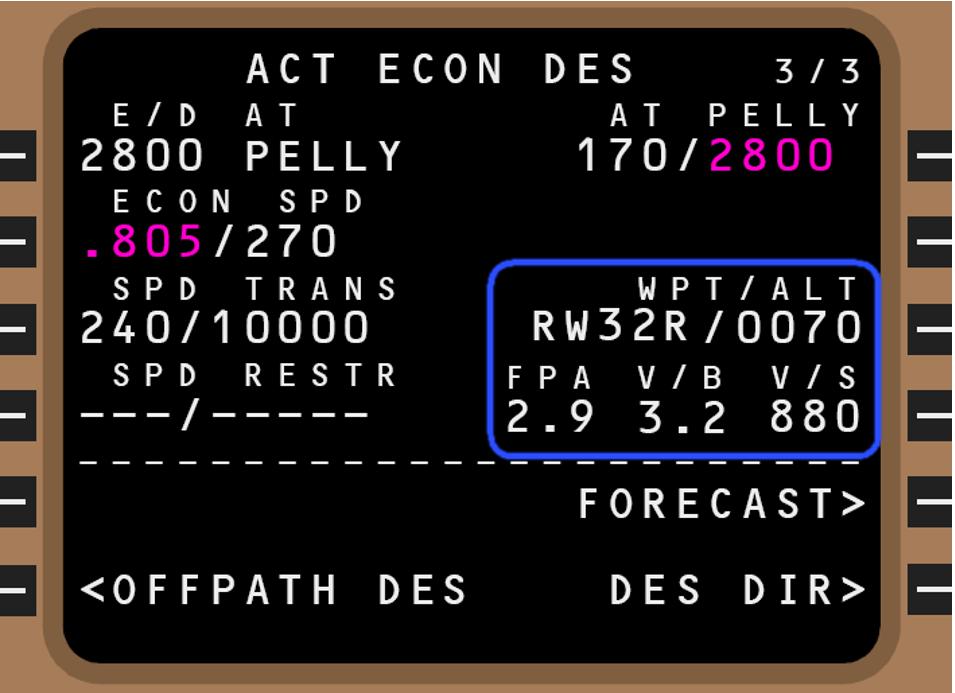 The Bearing/VS information can be particularly useful when transitioning from an approach on one runway to a landing on another in less than optimal visual conditions. The aircraft transitions from an environment where a wealth of distance/altitude/profile information is provided to the PF, to an environment where even basic direct distance to the runway can be unavailable. While manoeuvring to final the Bearing/VS to the Landing Runway improves situational awareness with respect to the desired 3°approach slope. However, while every waypoint in the ARINC database is available to enter into the VNAV DESC page WPT/ALT prompt – a runway that is not active in the LEGS page is not. Of course.

When the FMC is setup for an approach to one runway (eg: KLAX RW06R) but the landing will be on another runway (RW06L) the FMC WPT/ALT prompt will not accept the RW06L waypoint. However if the crew select the landing runway in the DEP/ARR page (eg: RW06L ILS Approach ) without executing the modification, this inserts the waypoint into the LEGS page and therefore makes it available for use elsewhere (FIX, VNAV Off Path Desc, VNAV WPT/ALT) The runway waypoint can then be line selected into the scratchpad, the threshold crossing height added (eg: RW06L/0162) and the result inserted into the WPT/ALT field. The pending modification can then be erased – the waypoint and information will remain on the VNAV Descent or Fix Pages as desired.

It’s worth noting that the difference between a runway change / runway side step / circling procedure is a blurred line. If changing the landing runway during an instrument approach is to be considered a circling approach – company A1 minima of 1000 ft AAL and 5000m visibility would be required.

Of these four points, a thoughtful and concise briefing is a big factor completely within the control of the operating crew. A late runway change presents the following issues that must be addressed during the Arrival Briefing:

Note that at KLAX all ILS’s radiate irrespective of the nominal “Landing” runway, unless ATIS/NOTAM’d otherwise.

Which missed approach will you fly? Which one do you have in the FMC? What do ATC expect? These questions should be discussed in the Arrival briefing and if necessary, clarified with ATC. Typically, if you’re cleared to land on RW25R, you expect to fly the RW25R ILS missed approach procedure. But part of the issue depends on when you agree to the runway change. It’s entirely acceptable to be cleared for “ILS Approach RW25L, cleared to land sidestep RW25R” based on the adjacent runway landing minima on the RW25L chart. In this case, based on the rules of manoeuvring for the runway after the instrument segment of an instrument approach – ATC would probably expect some form of the RW25L missed approach flown. Or would they?

Consideration should be given in the event of a Runway / Approach / Airport change to re-running the Descent and Approach checklists if the change occurs after they were completed. Not always necessary, not always practical – but worth a thought.